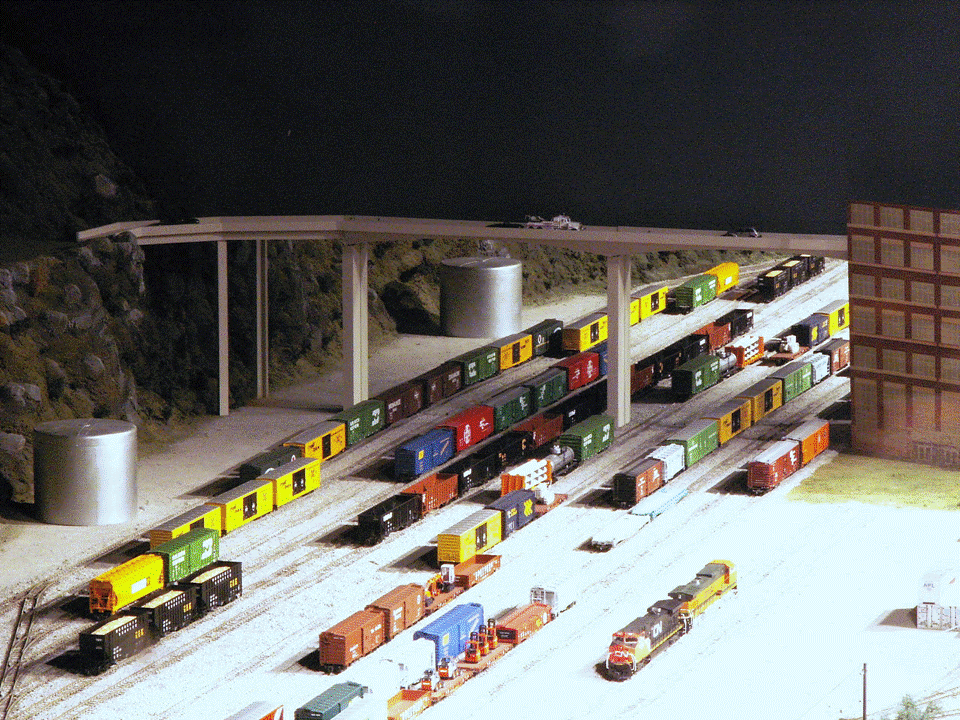 It’s been over a month since the EnterTRAINment Junction opened, and so far customers have been very impressed.  There have been anywhere from 300 to 700 customers per day.  Surveys with ratings on a scale of 1 to 10 (10 being best) have averaged 8.5 for the entire facility and 9.5 for the layout.  Bill […] 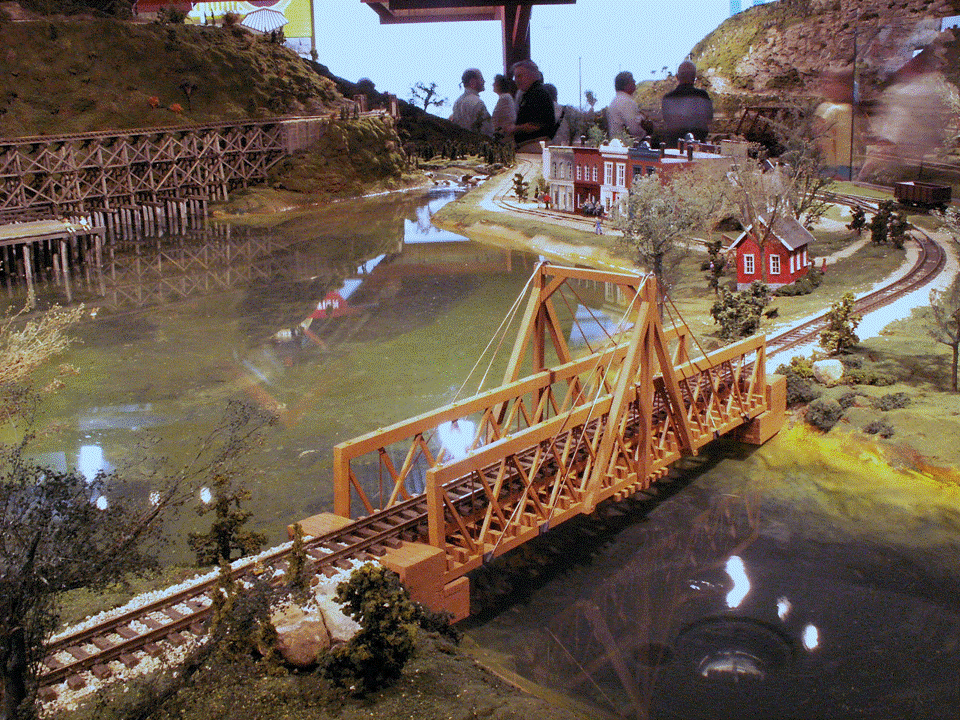 The EnterTRAINment Junction Family and Friends day on 15 July was a great success.  Over 1200 people attended, and I was happy to see and talk to many of you who attended.  The paid staff got some valuable experience and the volunteers got the opportunity to mingle with the participants.  We got some great feedback, […] 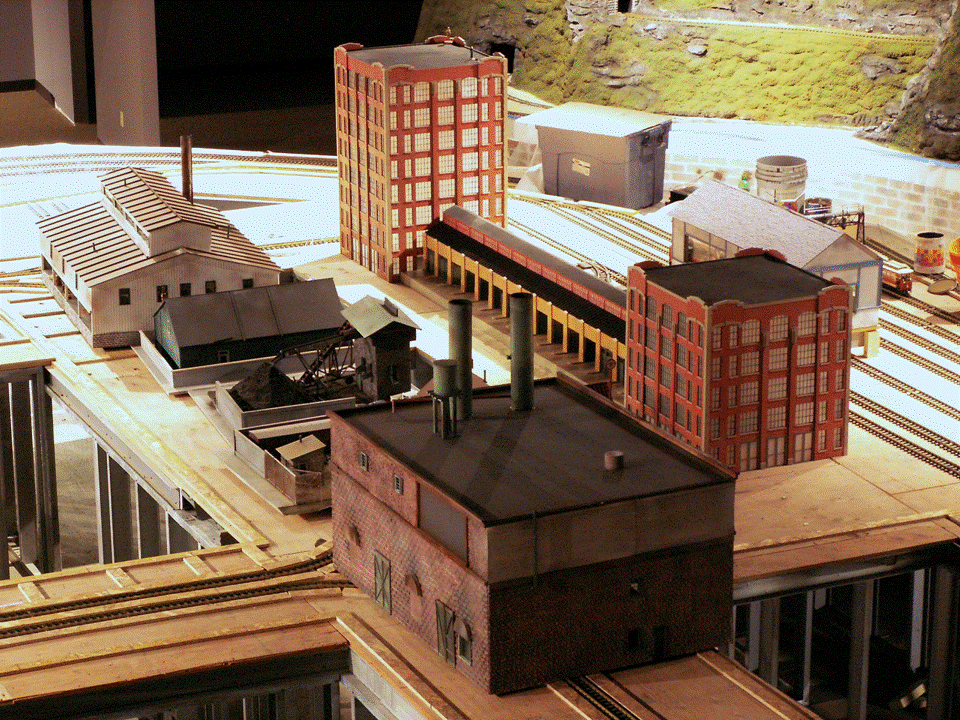 First things first, there are some changes in schedule which need to be reported.  The official grand opening is now set for Friday, 1 August 2008.  However, the facility and the layout will be open to public the two preceding weekends (18-20 July and 25-27 July) for public previews at lower admission prices.  Those dates […] 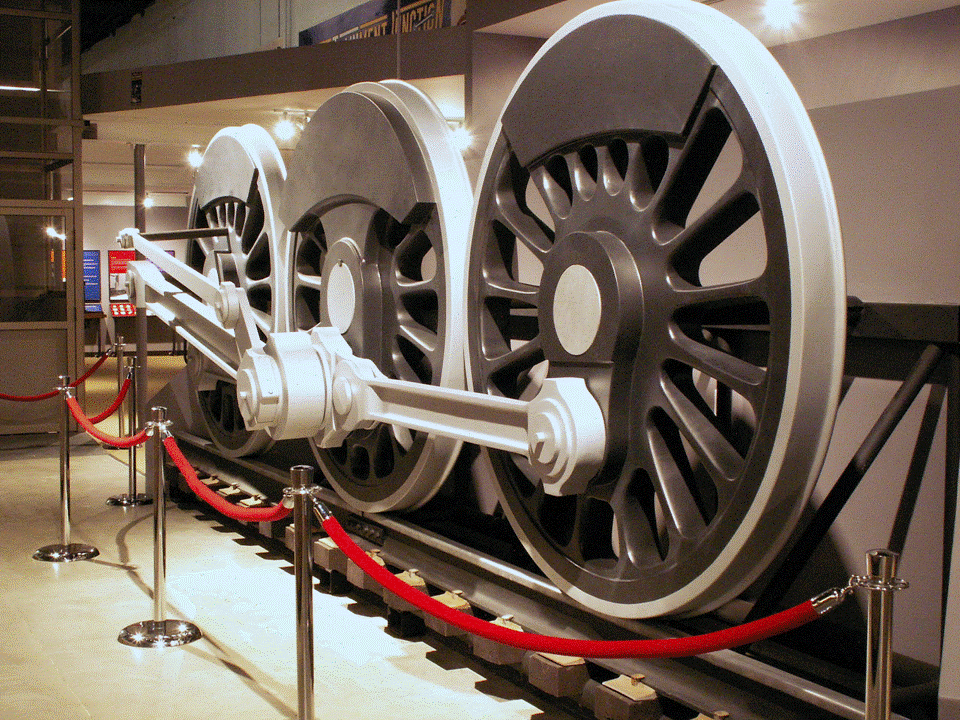 No more guessing about how much time we have to create a presentable, though not finished layout.  The official opening for the general public has been set for Friday, July 18, 2008.  This will be the opening for the entire complex: layout, maze, meeting rooms, gift shop, and food concession.  It is, however, unlikely that […] 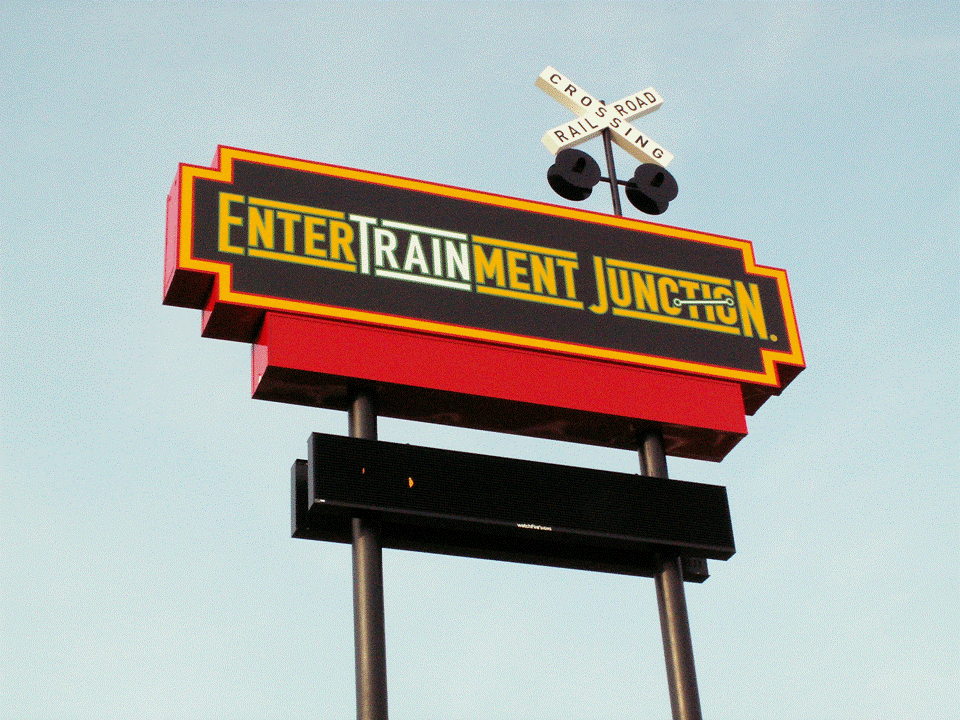 The signs are up, and already attracting visitors, which have to be turned away, though hopefully to come back after opening day.  Opening day is now projected to be on the last weekend in June or first weekend in July.  Figures 1 and 2 show the two signs put up during the last week of […] 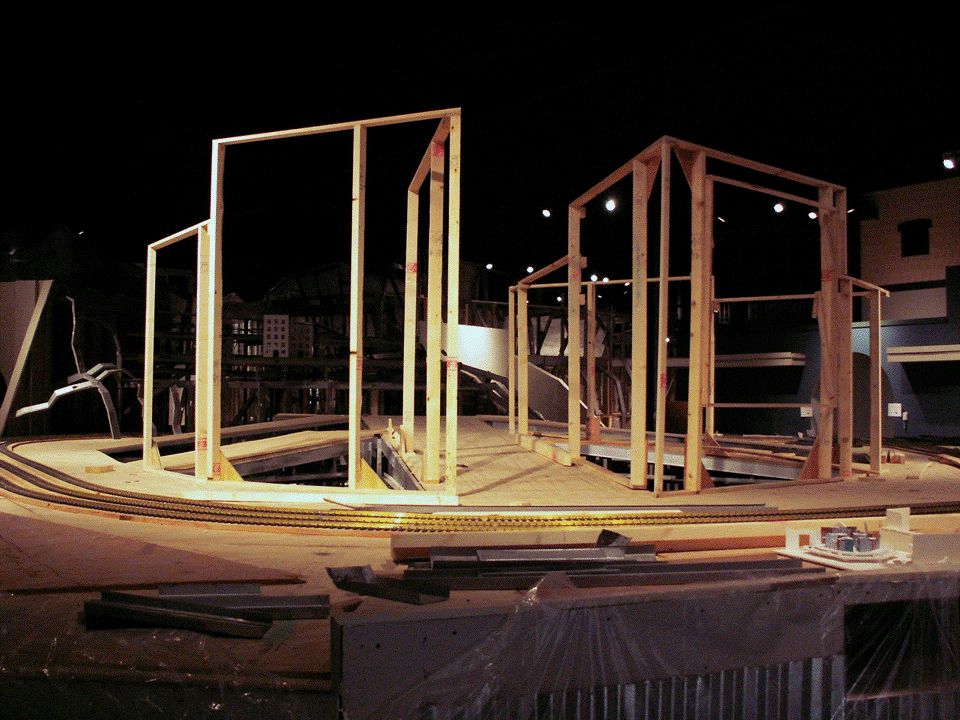 So much has been done to the layout recently that it’s much better to just show you in pictures the progress that’s been made than try to describe it in words.   Bob Mott and his son Bob Junior have been working to prepare the opening scene on the layout, the first that visitors will […] 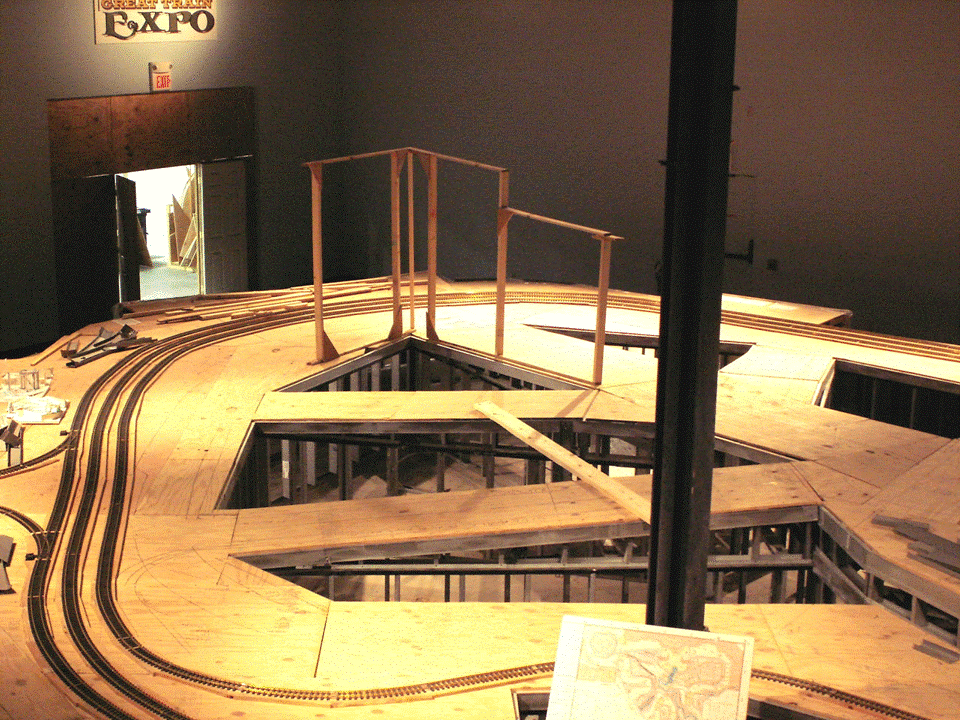 February has seen some major progress on the layout.  The tanks for the live water have been installed to make possible the waterfall, lakes, river, and canal.  Work has started on fiberglassing the riverbed.  The Early Period mountains, with most of the foaming complete, have gotten their first coat of paint.  A major effort is […] 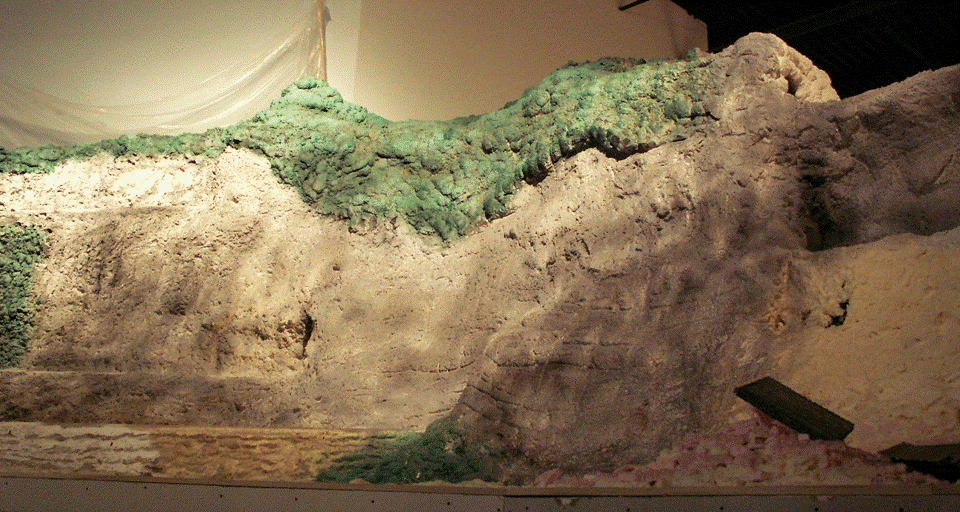 After the busyness of holidays was over, it was time to get back to work on the layout.  At our first planning meeting of the new year, Don Oeters announced that the layout would open in June 2008 in whatever state of readiness we could get it to by then.  Needless to say, the desire […] 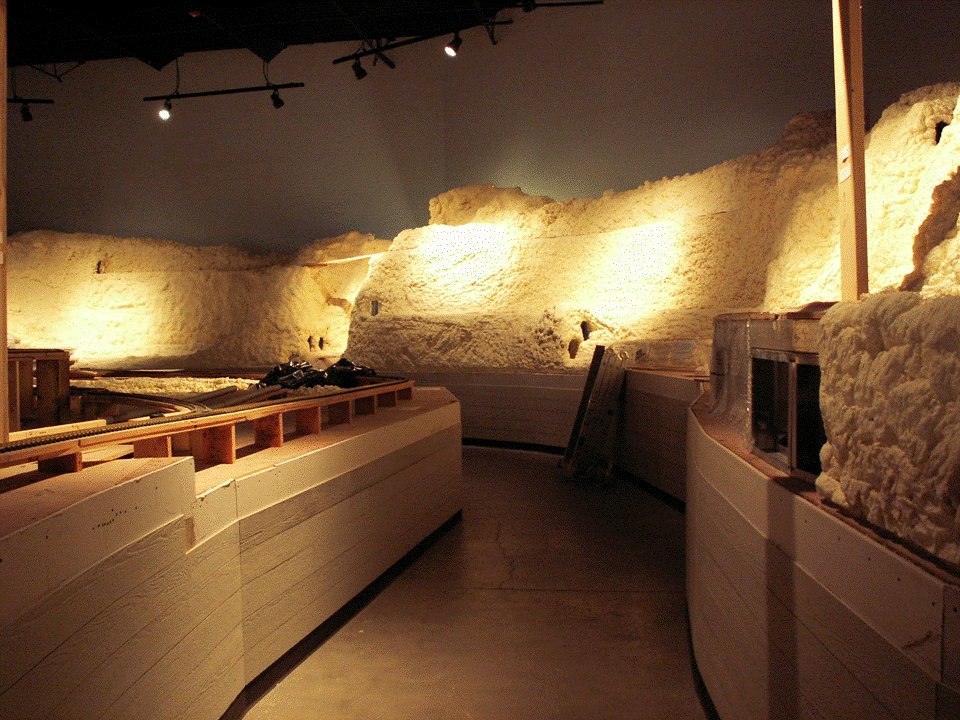 On 2 December 2007, EnterTRAINment Junction (EJ) held its first holiday party, for volunteers who had contributed at least a certain number of hours of volunteer work.  The purposes for the gathering were recognizing the volunteers for their contributions, introducing the EJ staff and volunteers to all participants, and good food and fellowship among like-minded […]