As in past articles, this time we’ll look again at some of the details of the EnterTRAINment Junction (EJ) layout which may not catch the eye at first glance but which contribute to providing a sense of realism to the layout and enhance its overall quality.  As usual, the order in which I present the selections is in the order in which you would see them as you progress along the layout’s aisle.

The first selection is part of the farm below the waterfall (Figure 1).  It’s visible almost exclusively from the mezzanine.  Distinctive features include the barn with its Rock City advertisement, a common feature of many barns in the middle part of the Twentieth Century.  The small field of corn is being harvested by hand, and the stalks are bundled, awaiting being gathered for use as bedding for the animals.  There is a windmill with blades turning.  And, if you watch closely, you’ll see the rotor change direction as though being driven by the weather vane to keep the rotor perpendicular to a changing wind.  This is subtlety which requires a fair bit of engineering to accomplish in the model, and illustrates the attention EJ modelers pay to details of what they’re modeling. 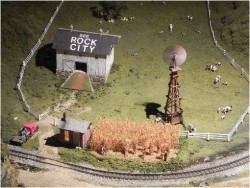 Figure 1.  The Farm Below the Waterfall

In the Modern City, a common sight are the numerous well-lit bus-stop shelters (Figure 2).  The one shown here has the usual complement of advertisements, bus-route maps, trash can, newspaper vending machine, and UPS drop box.  There’s also an assortment of passengers awaiting the arrival of the next bus (which is NOT the vehicle in the foreground!). 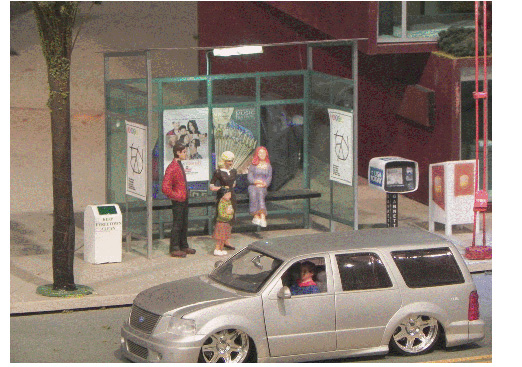 Across the aisle from the modern city, in the industrial area, a UPS deliveryman has unloaded a set of packages from a new and well maintained van for one of the trackside businesses (Figure 3). 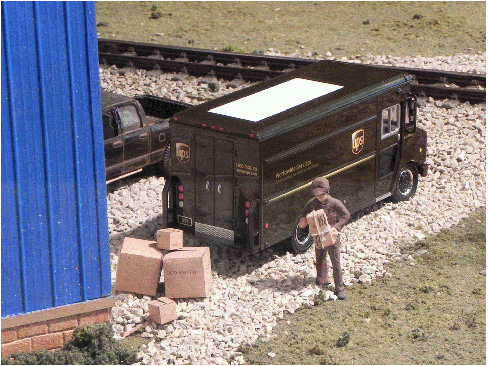 In the strip mall near the third subway station, a bike rack provides a place for customers’ bicycles in front of the Chinese restaurant. 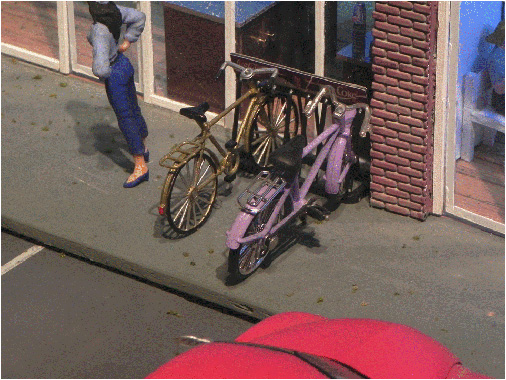 A bit farther along the aisle, the farmers’ market, which has been on the layout for quite some time, has finally gotten some customers for the wide variety of produce that’s available for sale there (Figure 5).

On the street leading out of the Modern City (across the aisle from the in-layout restrooms), a young lady pushes a child in a fancy new stroller.  Hope she’s careful as she approaches the double-track railroad crossing, with its heavy train traffic. 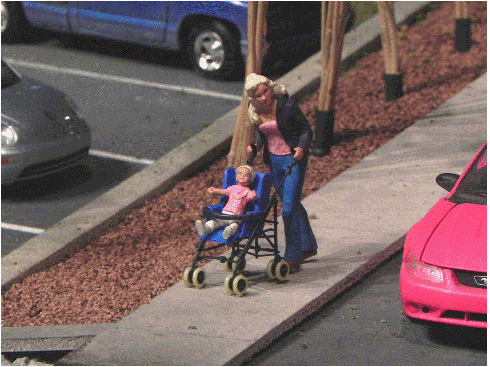 The richness of the layout’s details continues to grow as the volunteer modelers identify, create, and install new items.  Some of these details are outstanding models in their own right, while others just add to the sense of completeness.  All are meant to enhance the layout’s realism and the stories that it tells, both large and small.