This is a continuation of our look at EnterTRAINment Junction’s (EJ’s) newest attraction, its model of Cincinnati’s Coney Island amusement park.  The model officially opened on June 21, 2013, with some new and impressive features to make the nostalgic trip back to 1965 better than ever.

In the center of the layout area’s mezzanine is a kiosk (Figure 1) with a display case showing Coney Island memorabilia and two video monitors allowing visitors to select and view a series of historical films about the amusement park.  Being a fan of steamboats, I watched the film about the glorious, and tragic, story of the Island Queen, which used to bring great crowds of visitors from downtown Cincinnati to the park. 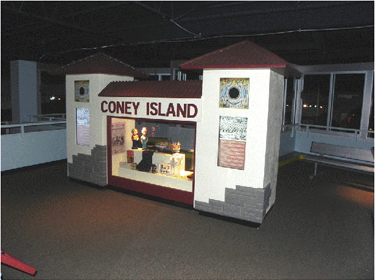 To help visitors identify the park’s rides which are represented in the model, control panels have been added with photographs of the actual rides at the park, information about them, and buttons to push to activate their models in the display (Figure 2). 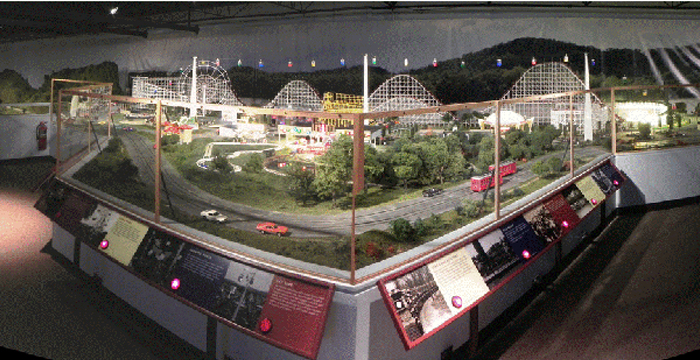 In addition to the Shooting Star roller coaster, Coney Island also had a smaller coaster called “The Wild Mouse,” which ran a zigzag course with sharp turns.  It’s located between the Haunted House and the Tumble Bug rides (Figure 3).  All three rides will be animated. 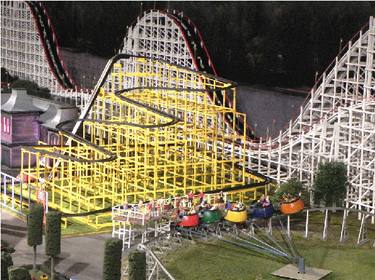 The Sky Ride (in the foreground of Figure 4) took Coney Island visitors from one end of park’s midway to the other, giving visitors a bird’s eye view of the park and the nearby Ohio River. 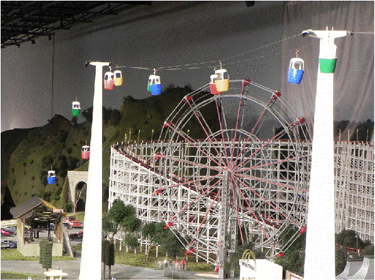 At each end of the Sky Ride was a Bavarian styled station, reminiscent of the aerial tramways common in the European mountains.  Figure 5 shows a gondola just arriving at the station near Moonlite Gardens. 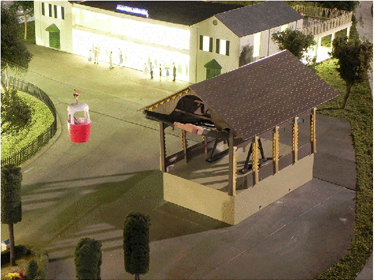 Finally, since this IS a model railroad layout, we can’t ignore the Train Ride (Figure 6).  It runs on a simple oval loop of track with a siding at the station.  It leaves the station, crosses a portion of the selectively compressed Lake Como and then circles back through the woods, where replicas of a settler’s cabin and Native American encampment add some items interest for the passengers’ enjoyment.  The locomotive was adapted from an O-scale narrow gauge model, so its 1:48 scale represent a half scale model (1:2 proportions or 6 inches to the foot) in the 1:24 universe of the of the Coney Island model. 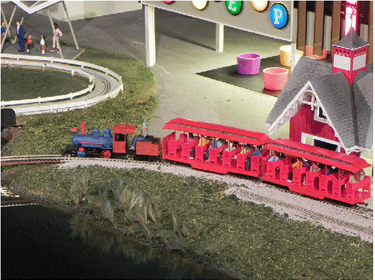 Though the Coney Island exhibit’s official opening has been announced and celebrated, and most of the features have been installed, this model, like the rest of the EJ layout will see continuous improvements as time, ideas, and the skills and efforts of the EJ modelers allow.

And, since Coney Island isn’t the only feature recently added to layout, next time, we’ll look at what else is new.