A train layout as large as the one at EnterTRAINment Junction (EJ) needs a lot of figures of people to provide some “life” and realism.  There are a number of ways to provide them, some easier than others.  This month, we’ll follow the process and the logic applied to one example and show how it progressed from plain unpainted molded plastic to the figure of a sophisticated lady.

The starting point is one of the figures bought in bulk in unpainted form (Figure 1).   Interestingly enough, her long bare legs make her an excellent candidate for modifying into a lady wearing any number of skirt or dress styles.  Another beneficial feature is that she has one arm which is not molded into the side of her body, allowing it to be modified to represent a lot of different poses, as you will see.  Unfortunately, her right arm and hand would be too difficult to “free” from her body, and so they have to be dealt with as they are or removed and replaced by similar items from another source. 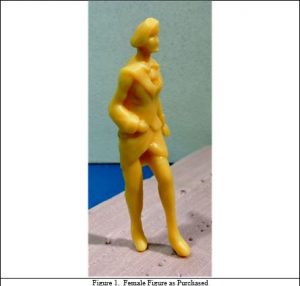 The lady’s jacket and tie limit her potential wardrobe, so they are removed with proper application of moto-tool, file, and sandpaper (Figure 2).  Also note that her left arm, which once hung straight down is now bent upward at the elbow.  This is done by carefully heating the elbow location with a heat gun and bending the arm to the desired position.  This works reasonably well on plastic figures, but don’t use bare hands to do it!  Figures made of resin do not respond well to heating, so any repositioning needs to be done by cutting and re-gluing. 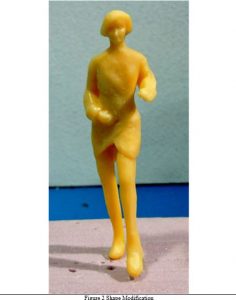 The bare plastic of the figure is too shiny even though it is flesh colored.  It needs to be painted with flat paints for skin, hair, and clothes.   Figure 3 shows the first color scheme. 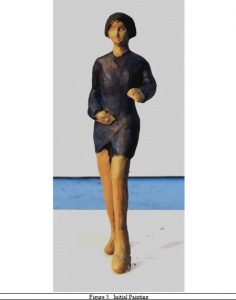 The next modification is the addition a new skirt (Figure 4), made out of a coffee filter, glued on with hot glue and trimmed to size.  Many different materials have been used to create new clothes for the EJ figures.  Also note the metal spike sticking out of her left foot.  This is a headless nail with its top embedded ½ inch or so into her leg.  Like many of the figures on the EJ layout, she doesn’t stand well on her own and so needs some rigid support to keep her upright on the layout, where a hole is drilled at the desired location to fit the spike. 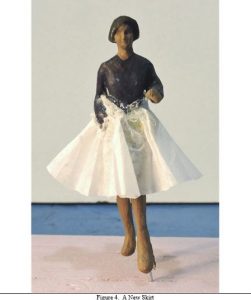 A new color scheme was needed for this figure, so the dress was painted red with white trim (Figure 5).  The details of her face have been painted.  Buttons made of beads were added, ruffles were added and painted for a hat, and shoes were painted on.  Note the “attached” right hand is modeled as though it were in the pocket of her skirt.  She’s ready for her new role on the layout. 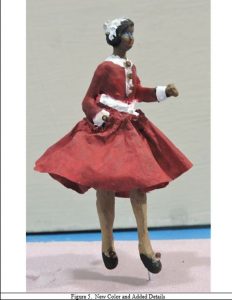 Modified versions of this woman figure are used in many places on the layout.  Just a few examples are shown in Figure 6: as a waitress in Finnegan’s Pub with a new dress and carrying a tray with beers (left); as a plain Jane with her original jacket and tie and a new hairdo and longer skirt in the Fox Theater lobby (center); and in five different configurations on and near the Grand Hotel’s main staircase (right). 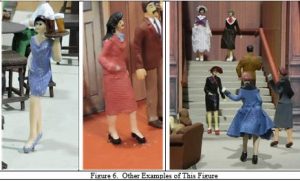 The talented lady volunteers who modify and paint the many figures used on the EJ layout can be justly proud of their creativity and artistry in turning a very ordinary plastic figure into so many different and interesting “characters” that tell their stories in the many scenes which they inhabit on the layout.