One of the challenges that comes with upgrading a building on the EnterTRAINment Junction (EJ) layout with a lighted interior is the need for the exterior features to also be a consistent part of the upgrade.  That means having lighted signs identifying the businesses whose lighted interiors are modeled.  This month we’ll look at the design of the lighted sign for the Airliner Diner in the Middle Period city’s Fox Theater building, whose interior was featured in Article 111.

The red sign at the left of Figure 1 is the old sign, made of several layers of red plastic with the lettering painted on the outside of both sides.  The sign was visible to EJ customer from both sides because it extended outward at an angle from the corner of the building.  Unfortunately, attempts to disassemble the old sign without damage failed; so, a new sign needed to be built to replace it, incorporating the desired lighting (right side of Figure 1). 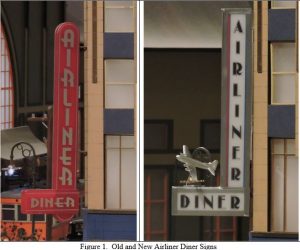 Figure 2 shows the parts used to construct the new sign.  The lettering was created on a computer in reverse (mirror mode), printed on paper, and then laser copied onto overhead-projector transparencies with two images for each part of the sign, one for each side (shown in Figure 2 at the right).  Each image was much wider than was actually used to allow for some adjustment during assembly.  The mirror mode was used so that the image on the transparency would be on the inside surface of the transparency when it was attached to the outside of the sign.  That way, the laser-printed image would not be damaged when the sign was handled.

The two L-shaped wood-framed structures in the center of Figure 2 were made of translucent white plastic to allow the lighting from the light-emitting-diode (LED) strips to shine through and form a lit white background for the lettering.  The LED strips are the ones with the wires in Figure 2.

The five white strips surrounding the “Ls”were opaque white plastic, which formed the edges of the sign.  The edge pieces were glued to the wood frame of the “L” pieces with enough space between the two “L” pieces to allow the LED strips to  inserted into the a slot between the wood of the two “Ls.”  This provided even spacing to between the LEDs and the translucent panels of the “Ls” (about ¼ inch) which diffused the light, providing more even lighting rather than a harsh bright spot at each LED which would result if the translucent panel was too close to the LEDs.  The LED strips were not glued into the slots so that they could be removed, should they require maintenance. 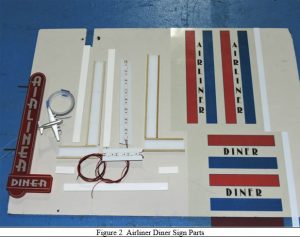 To add a little “pizzazz” to the sign, it was decided that a stylized airplane would be just the right feature, and it would be consistent with the style of signage of the period.  Which airplane?  The Boeing 307 Stratoliner fit the bill nicely.  It was from the time period, and it was fairly easy to construct out of wood dowels and wood sheet stock.  A three-view drawing, sized to the desired 2 ½-inch wingspan (approximately 1:500 scale) was used as a pattern, and with appropriate use of scroll saw, belt-sander, files, putty, and silver paint, the resulting shape took form (Figure 3). 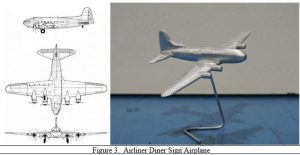 The installed sign is shown in Figure 4.  The thickness was needed to provide the light-diffusing spacing inside.  The airplane was mounted on a wire which was glued to the lower leg of the “L.” 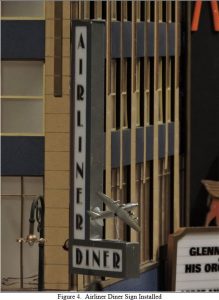 With the wiring hooked up to the usual 12-volt power through a variable resistor, the brightness was adjusted downward to provide better readability of the letters during the dusk-lighting periods on the EJ layout.  The high contrast between the lighted sign and the darker background makes it very difficult for the camera to show both the light and the darker areas as clearly as the eye can see them (Figure 5). 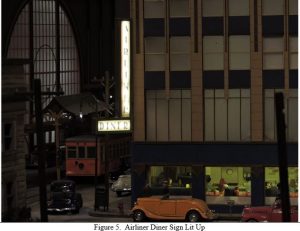 With the last changes to the Fox Theater Building complete, the team of volunteers has moved on to the next projects.  There are still other EJ buildings needing interiors, so stay tuned.