The work of modeling the interior of the EnterTRAINment Junction layout’s Elwood Grill has included paying attention the many accessories that could be found in a late 1940’s diner.  In this article we’ll explore not only the models of some of these details, but also indicate how they were created.

One of the most iconic features of diners of the period were jukeboxes, which in those days allowed customers to select and play records of the popular music current at the time.  Sound would be produced not only from the main cabinet (which contained a song selector, the records, and the record player) but also from satellite units, usually located at each table.  Those satellite units also allowed customers to select and pay for songs, which would then be heard from all the units in the diner.  The main cabinet shown in Figure 1 was modeled based on pictures from the internet.  It was constructed using a 1/8” sheet of white plastic for the back, a 1” strip of sheet aluminum for the sides and bottom (from a roll of roof flashing), a piece of clear acrylic for the front with an attached 3-LED light strip (angled inward and upward) at the bottom, and a paper printout of the jukebox front.  Small screws at the top and at the bottom of both sides fastened the clear acrylic front to the aluminum strip, creating a sturdy enclosed box.  The paper printed front was taped over the acrylic front with clear tape, the tape extending onto the aluminum sides.  Silver-colored automotive striping tape around its edges was used to block any light leaks.  When assembled and powered, it looked like picture at the right of Figure 1.

For each table in the diner and at strategic locations on the counter (every other seat), there was a set of condiments (ketchup, mustard, salt, pepper), a paper napkin dispenser, and a jukebox satellite station (Figure 2).  The face of the satellite station was again a paper printout of a picture of the front of such a station.  The station itself was shaped wood with a piece of sheet plastic for the back.  These were not lighted in the model. 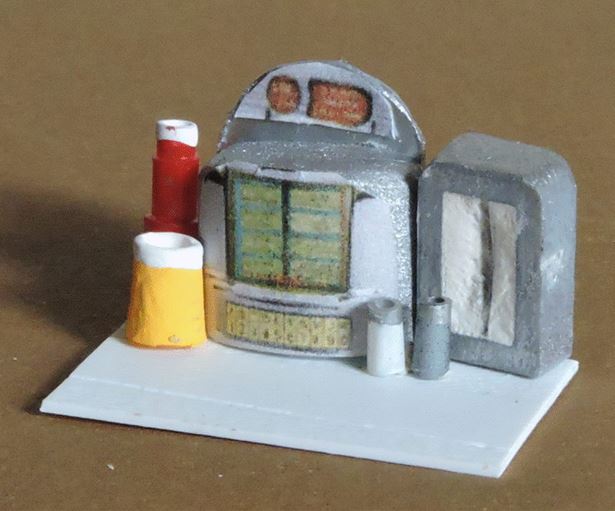 The condiment containers were made of “clear” shrink tubing.  The upper part of Figure 3 shows the parts needed to make the ketchup bottle and its assembly and finishing.  Since the large diameter (1/8 “) shrink tubing would not shrink enough to make the thin neck of the bottle, three pieces of nested shrink tubing (1/16”, 3/32”, and 1/8”) were used to step down the diameter and give the model an approximation of the real bottle’s taper.  At 10 feet from the viewer, this compromise still yielded a correct appearance.  Red paint representing a full bottle and white paint for the cap finished the look.  In order to keep the tubes aligned while shrinking with a heat gun, a piece of 1/16” wire was used through the innermost tube to hold the nested pieces on top of a piece of aluminum while heat from the gun was applied (bottom of Figure 3).  Note that heat in such an operation should be applied sparingly: just enough to shrink the tubing without adhering it to either to the wire or to the aluminum.  The aluminum was used to protect the tabletop below from the heat of the gun. 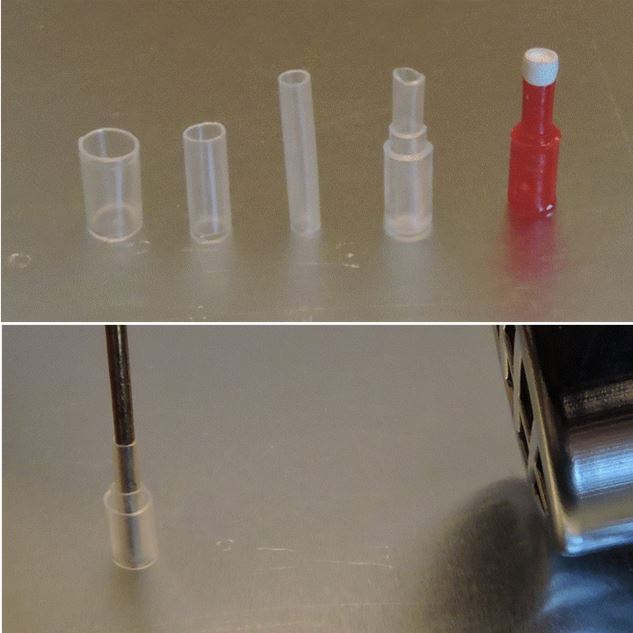 Figure 4 shows the different mandrels used to shape the shrink tubing to make models of the various containers.  A piece of heavy copper wire was filed into shape to form Coke glasses which were made of 1/8” shrink tubing.  A medium punch was used to shape the mustard container also using 1/8” shrink tubing.  The ketchup bottle’s mandrel and tubing is described above.  A fine punch and 1/16” shrink tubing was used for the pepper and salt shakers.  All the containers were colored on the outside, not the inside, to make painting them easy.  Metal mandrels were used for all of these, because it was easier to prevent the tubing from adhering to the mandrel.  Wood was tested as a mandrel material because it was easier to shape, but it caused major adherence problems when trying to get the shrunken tubing off the mandrel.  Note that the thickness of the tubing effects where features will be located on the outside of the shrunken tubing.  This occurred on the Coke glasses, whose mandrel had to have its upper flare much higher on the mandrel than it would be on the finished part, so that the flare would be in the correct position.

Figure 4.  The Mandrels and Their Products

Other items common in diners are shown in Figure 4.  The pay telephone was made from scrap plastic pieces of the correct width and thickness.  An appropriately-sized paper printout of the front of a pay phone provided the dial and front features.  Note that the edges of the paper show white, in stark contrast to the black background of the phone (left image).  A fine line black marker fixed that problem (center image).  The handset was carved from a piece of wood and painted black.  The soda dispensers were made from brass wire for the riser, a piece of dowel for the valve, the tapered end of a cooking skewer for the nozzle, and a piece of thin wire with its insulation still attached for the handle (right image).  A little paint, and voila!

Some other features of note are shown in Figure 6.  The cash register was made of three pieces of wood: a thin flat rectangle for the back, a quarter-round for the front, and thick rectangular for the base.  The keys and cash display were properly-sized paper printouts.  The gumball dispenser was made from a spare spherical decorative finial from a large-scale building kit.  It was mounted on top a piece of dowel with two washers as a base.  Appropriate painting yielded the finished product.  The milk shake mixer’s top was shaped from a large dowel; the back was carved from a piece of wood; the base was a piece of plastic; the mixing rotors were pieces of wire with fine wire agitators around them; and the cup was a mandrel-tapered piece of shrink tubing.  The toaster was made from a block of wood.  The coffee pots were made from the same finial as the gum ball dispenser or from a large bead; a flattened and bent wire was used for the rims and handles. 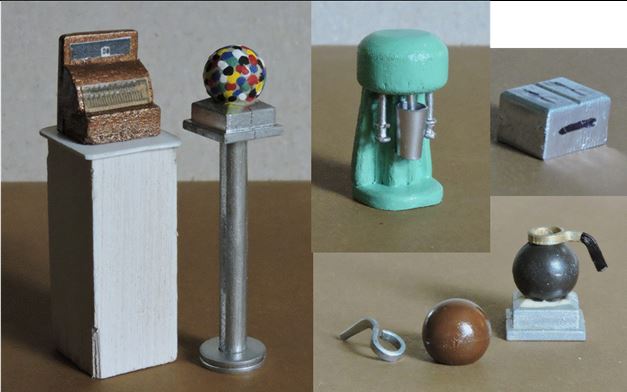 It has been astounding how many different little and big details are contained in such a “simple” business as a diner.  There’s a lot of work still to be done and described for you to see and enjoy, so stay tuned.