For those of you who don’t know me, my dad is the owner of EnterTRAINment Junction. It has been his DREAM for many years to visit Miniatur Wunderland in Hamburg, Germany. A few weeks ago I was able to take him and my husband, Mike, to see the massive display with me! 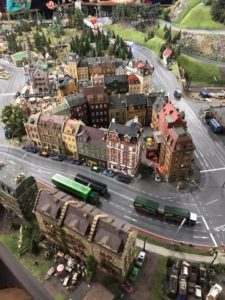 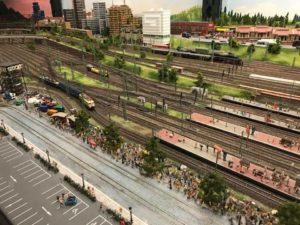 Pictured above are just a few examples of different sections of the layout.

The craftsmanship and detail is comparable to that of EnterTRAINment Junction-it’s just a lot smaller! They also have many hidden things throughout the layout which makes it hard to see everything the first time through.

Just a few things I noticed… With HO scale, it’s hard to have anything much taller than 6 or 8 feet because otherwise it would be disproportionate to the rest of the layout. At EnterTRAINment the mountains can be as tall as 14 feet which gives the feeling of being more immersed in the layout.

On the flip side, since their layout is HO they can squeeze a lot more in! For example, the airport with planes taking off and landing would be nearly impossible to do with G scale, because G scale would be about 350% bigger. (!!!) Yes, the miniature airport  had planes taking off and landing!! A plane that is 18″ in HO scale is around 5 feet in G scale. I think that might have been my favorite part – as well as all the automated cars moving around. (They even have an “accident” take place every so often and ambulances will come to the scene!) The automation at Miniatur Wunderland is INCREDIBLE! 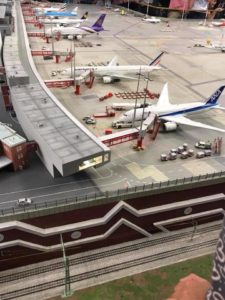 You can fit larger ideas into an HO display, (again, such as the airport) but it’s hard to do much work with interiors of the buildings because everything is so tiny! Nonetheless, I’m pretty sure I saw a few detailed interiors -they’re just a little harder to see!  You can think of G scale as a magnified version of HO.

Another thing that I LOVED is the 9 themed worlds that they have. I’m a huge world traveler so I appreciated them showcasing multiple cities and countries throughout the display. You can see a sample city (Venice) below: 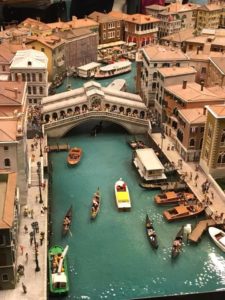 Most indoor model railroads are done in HO and N scales so I can safely say that Miniatur Wunderland is definitely the most impressive HO scale layout. Indoor G scale layouts are harder to come by and, I know I’m a little biased, but I think EnterTRAINment Junction has the best G scale that I’ve seen! Both attractions have many similarities and many differences, but they both deserve a spot on any train lovers bucket list!