While EnterTRAINment Junction mainly focuses on model trains, we do also have model cars in our display. These cars have had a lot of thought put into them such as where to place them and even how to best modify their look to match the perspective time period. Most of the cars, which are mainly metal diecast, were purchased whereas we do have some that have been donated to us. This article will take you through some of the distinct cars in each period.

As you might have guessed, you don’t start to see cars in our display until a little further on in the layout. In our Civil War period you see trains, but no automobiles… that’s because automobiles didn’t start showing up until the late 1800’s!

Did you know we have a delorean hidden in our display?? It’s on the right hand side- right before you enter the middle period. 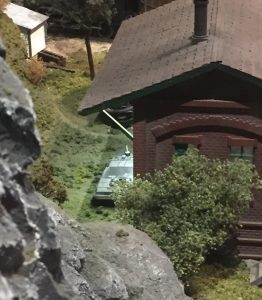 Entering the middle period, you can see below the famous duo, Bonnie and Clyde robbing a bank. This car closely matches their getaway car. 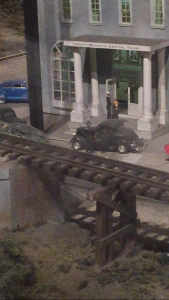 Hot rods were a big deal in this time period coming even before the sprint cars. Our volunteers bashed and weathered this one to make it more realistic. 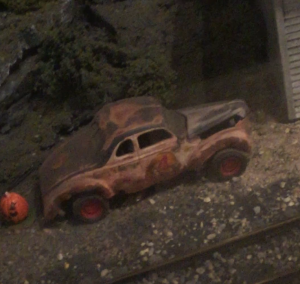 There is even an ice cream truck named after some of our amazing volunteers! 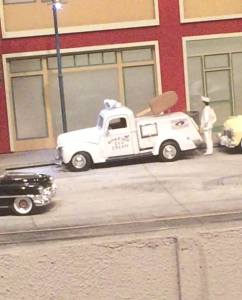 We have some military vehicles from WWII and later featured in the middle city as well.

The taxis in our display were scratch built. What once was just a regular car was painted to look like a taxi from the 1940’s! 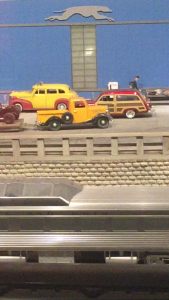 Moving into the modern city we have many donations cars. Some are from specific places like CSX. 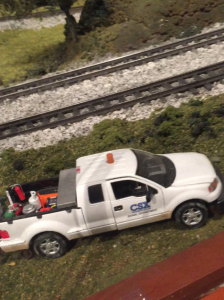 The car show in the modern city has all donated, plastic built models, that are highly detailed. One was even given to us by the corvette club! 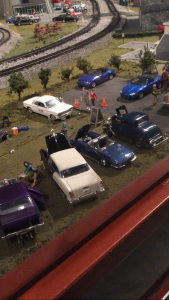 We are very thankful for any and all donations -be it cars or trains!

As you can tell, there are many cars throughout the world’s largest train display… around 200 to be exact! The volunteers work very hard to detail, weather, and create realistic looking automobiles for each designated area. Some cars were modified, reconstructed, and painted based on our needs and we couldn’t be happier with the end result! Be on the look out for some of these featured cars next time you visit us!