The making of EnterTRAINment Junction

This August EnterTRAINment Junction will be celebrating our 10th ANNIVERSARY!! We couldn’t be more excited and to celebrate I’ve decided to write a mini blog about the making of this wonderful place!

EnterTRAINment Junction was dreamt up back in 2003, the building was purchased in 2005, and construction started in 2007. The grand opening was on August 1st 2008, but it was a far cry from the EnterTRAINment you know today!

^^It was literally an empty warehouse!! Layout plans were taped to the floor to give people an idea of how massive it was going to be.

Over 130 volunteers imagined, created, and continue to maintain the 25,000 sq foot train display.  The GCGRS and MVGRS are two of the clubs mentioned in previous posts that have spent over 150,000 hours working on the display!

The beginning stages involved the volunteers breaking off into teams  which meant each team had a specialty they could focus on.

To start, volunteers used 58,000sq feet of expanding spray foam along with poultry wired covered with fiberglass cloth to form the mountains. The foam was easy to carve and was also fire resistant. The entire carving process took about 3 months to complete. 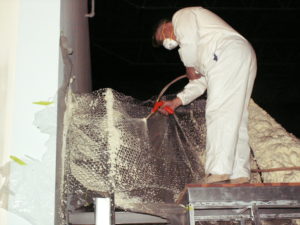 Once this was finished, volunteers started painting the mountains and adding dirt, grass, and other features. There was approximately 1,968 gallons of scenic colored grasses that were used in making the layout! There were also more than 6,000 hand made trees and shrubs. 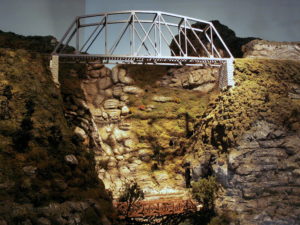 While the layout was starting to take shape, we had people working tirelessly on detailed figures, houses, and more. A house, for example, took over 180 hours to complete and each one was built from scratch. Figures were carefully detailed, each one taking 2 hours to paint. If the figure needed reconstructing, they would break off arms, glue them back on, and reconstruct them based on need.

With the entire crew working together, EnterTRAINment grew into what you see today. It has come a long way from an empty warehouse and we can’t wait to see what other additions will be made in the future!

Stay tuned for a special announcement in regards to our big birthday celebration! COMING SOON!