1. The waterfall can be seen from each of the three time periods. The reason for this is while everything else (cities, towns, forests) change, the waterfall remains the same throughout the years.

2.Conceptually we wanted to make your walk through the layout so that you can never see the next section. As you walk through the display you get the sense that it keeps going and going so that you never know what’s next.  The layout itself is based off train time periods. (early, middle, modern) We wanted guests to get the feeling of being immersed in the layout rather than just looking at it. 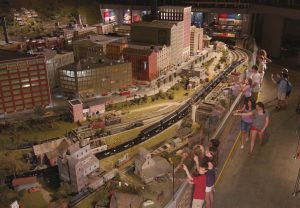 3.  We have 3 tanks underneath the display that hold water.  There are 1,800 gallons of water flowing throughout the display and there is a pump used to recirculate the water and take it back to the top of the waterfall.

4. No one makes G Scale Subway trains so the volunteers made them from scratch. 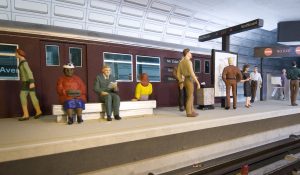 5. We have had people visit us from over 37 countries and all 50 states!

7. Our Volunteers have created 7 figures of our employees and placed them in the layout. Have you found any of us? Here are just a few examples:

8. The name “EnterTRAINment” was conceived by the owner while waiting on a delayed flight in an airport by repeating “entertainment” and “train” repeatedly, since those were the two things he wanted his new company to revolve around.

9. Currently we’re working on adding more interiors to the buildings in the middle city as well as updating electronics. 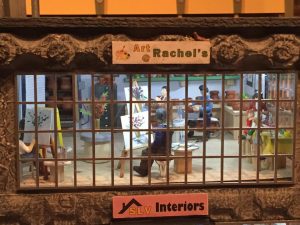 To find out more about our train display check out our blog series Big Train Project!