A Day in the Life of the Train Master! | Entertrainment Junction

< Home Blog A Day in the Life of the Train Master!

A Day in the Life of the Train Master!

This week we’re going to take an inside look at our Train Master, Larry, and some of what his job entails!

A typical day for Larry involves coming in early to work (usually as early as 6:00am!) so he can prep new locomotives, repair locomotives/rolling stock, fix burned out wiring, and sometimes even make parts…. all before the EJ day begins! Once we open for the day, Larry starts up the system and he is off to his next task –  checking in trains. Larry will go through the layout to see that each train is running and doing so properly.  Is a locomotive running too fast?  Too slow?  Is it squeaking too loud? If so, it’s time to trouble shoot. On a good day, check in can last 45 minutes. On a bad day, it could last several hours.

Even before a train makes it onto the layout, Larry takes a new engine out of box, takes it apart, checks it for defects, thoroughly lubricates it, and sometimes makes minor modifications to extend the life of the engine.  What typically could be a train that would make it a month, he can make it last 6-8 months (or longer) after some minor adjustments.

“Buying a train is like buying an automobile,” he says, “some makes and models are better than others.  Some have a problem within a few weeks and some locomotives can run for 5 or 6 years with minor problems.” 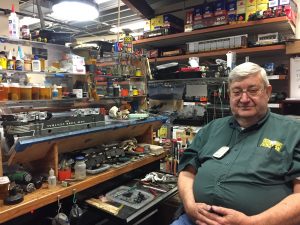 After all this work, it’s finally time for some lunch.  So, after washing all the grease, oil and dirt off of his now blackened hands, Larry grabs some food and enjoys the one time of the day he can sit and relax.  Then it’s back to either fix another operational problem or work on maintenance for another locomotive.

Larry says “…one of the biggest issues is when parts are out of stock. Some parts are not available because the manufacturer has discontinued a certain model or in some cases, such as Aristo-Craft, have totally gone out of business” *.  Larry has been able to fabricate replacement parts in some instances (wheels for example).  He cannot, however, make gears or motors. “Motors have very specific dimensions and specifications like gear configuration and vary greatly from locomotive to locomotive so we spend a lot of time looking at eBay hoping to find what we need ‘gently used’.”

After one final check of the trains on the display, sometime in mid-afternoon, Larry heads home hoping it all starts up when he comes in the next morning.

So, as you can see, a lot of work goes into what may seem like a relatively simple process. Between checking in the trains, trouble shooting, maintaining, and repairing trains, it’s definitely an exhausting day. So, the next time you check out our train display, think of Larry and all of his work to keep things running smoothly!

*If you know of anyone looking to get rid of used or new engines, send them our way! (We’d be especially interested in Aristo-Craft diesel locomotives!)  Give us a call at 513-898-8000 and ask for Larry at ext. 204.