What’s a birthday party without fun activities?! We’ve compiled a list of some of our favorite “active play” birthday party ideas that are sure to keep kids happy and, well, active!

To set up for this game, place a box (or two boxes if you want to race!) on the ground which will act as the “engine.” On the other side of the room, fill two buckets with equal amounts of “coal” (black bean bags or something similar)

Players must toss the coal into the train engine boxes. First team to fill their engine box wins. 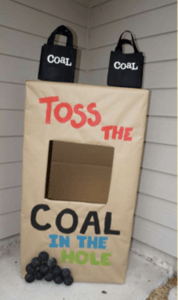 Enjoy the classic game of musical chairs, but with a new twist! Instead fo setting the chairs up in a circle, chairs will be set up in rows just like those on a train.

Divide players into two teams. Each team will have a conductor’s outfit – hat, vest, and bandana – and a handful of tickets. (one for each player) This game is essentially a relay race. The first players in line must dress up as the conductor, run to a “ticket box” (cardboard box with a slit on the top) to drop their ticket, and then run back to their team.  They will then have to give the outfit to the next person in line and the process repeats itself.

All you need for this one are a few large boxes. Cut the tops and bottoms out of the boxes and then paint them to look like train cars. Divide into two teams. Have players stand in the train cars and pull them up around their bodies. The trains must race to the finish line. If this is too easy, you can add to this by creating obstacles for the teams to get through in their train cars! 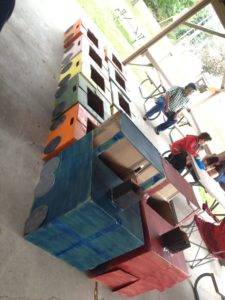