The next project which will be the subject of several of the upcoming reports is the installation of a visible interior in Elwood Grill located in the EnterTRAINment Junction layout’s the Middle City.  This diner is located in one corner of an industrial building (see arrow in the upper part of Figure 1) two blocks from the Grand Hotel, which was the subject of the previous set of reports.  The lower part of Figure 1 shows a close-up of the Grill, as viewed from the EnterTRAINment Junction mezzanine.  The obtuse angle of the outer wall adds some modeling challenges but also provides more visibility into the diner, making that part of the scene more interesting. 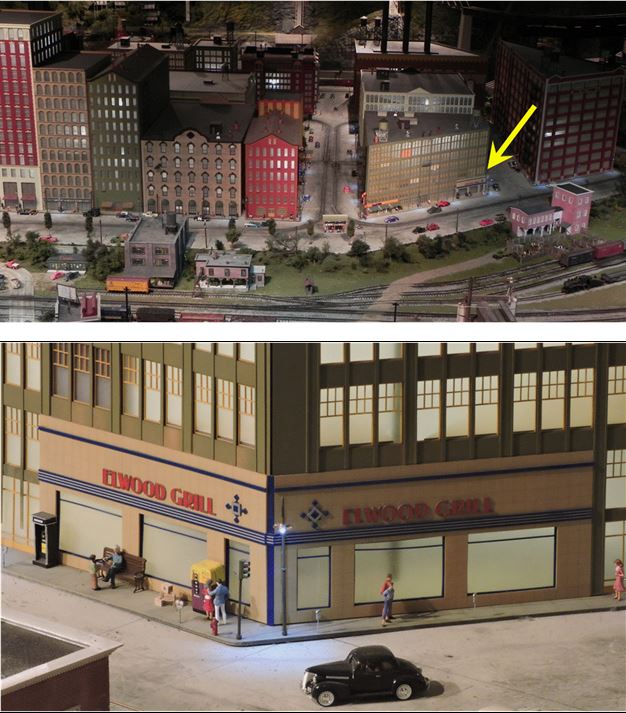 One of the objectives of these reports is to share with you some of the ideas the volunteers applied in producing interiors like this.  The first step was to make a pattern of the interior of the building and taking measurements of its inside features.  The pattern was essential for accurately capturing the angle of the walls and ensuring a good fit for the interior when it was installed.  From the pattern and measurements, a plan was produced to guide the volunteer team members’ further efforts (Figure 2).  The plan included spotting the locations of the eleven booths, the customer counter with its stools, and the work counter at the back wall.  It also provided the intended heights, widths, and depths of the parts for the booths and for the customer counter. 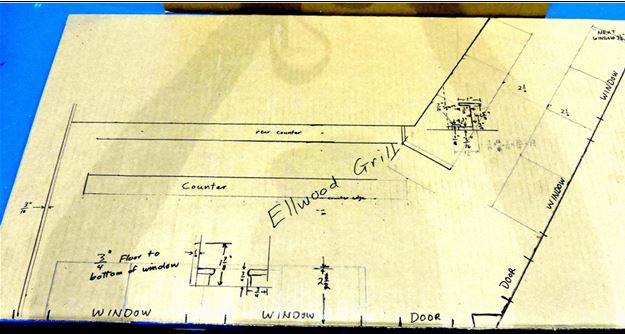 Once the plan was completed, work began on the easiest parts first, the Grill’s furniture.  The look was guided by photographs from the Internet of diner interiors timed to the late 1940s.  The booth seats were made of pink extruded foam insulation (Figure 3).  They had to be produced “in quantity” (eight with double seats [shown]; and six with single-sided seats, for the ends of each section of booths).  The task of making multiple copies was made easier by using appropriately dimensioned guides on the scroll saw used for cutting the foam.  The table tops were pieces of scrap sheet plastic (window cut-outs) supported by a single central post (a roofing nail, its large head providing ample surface are for gluing to the table top). 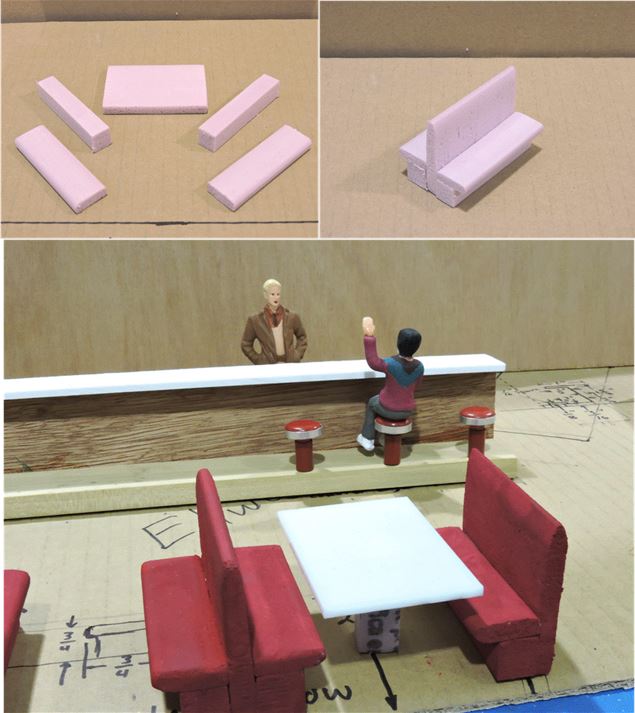 The iconic diner counter stools of the period were red vinyl-covered seats with shiny metal bands around them, and a single central pedestal supporting them.  The model stools were made from large push pins with the lower flange removed; a strip of aluminum from a soda can provided the metal strip around the seat; and a piece of drinking straw was used to extend the central pedestal to the appropriate height (Figure 4 top).  The wall supporting the customer counter was chosen to be made of glass blocks; these were simulated by copying an appropriately sized repeating glass block pattern onto a transparency sheet (like the ones normally used on overhead projectors).  The clear sheet provided a partially reflective surface somewhat like what the rippled surface of glass blocks would provide.  The counter top was piece of 1/8” sheet plastic with the metal edge simulated by silver automotive striping tape.  The bottom part of Figure 4 shows the stools installed on a step in front of the customer counter.  We chose to use the step, rather than another kind of foot rest, to get the customers to the right height at the counter and provide them with a place to rest their feet. 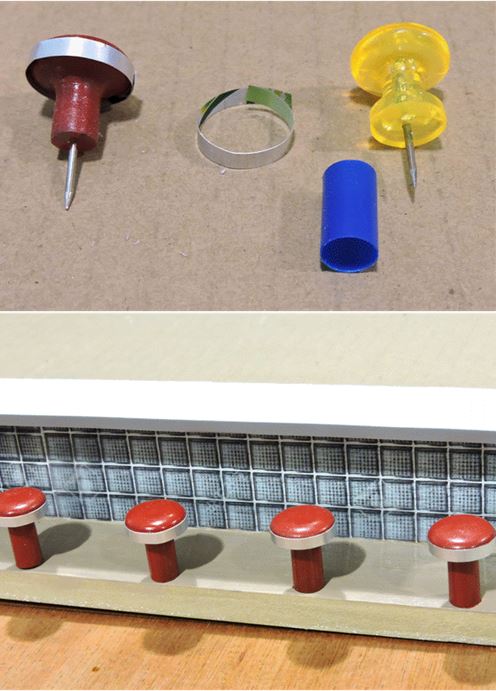 Figure 4.  The Stools and Counter

With the furniture mostly done, it was time to tackle some of the diner’s accessories, most of which were needed in quantities of up to 16, to provide enough appropriately accessible amenities for each of the seats available to the Grill’s customers.  Those accessories will be covered in an upcoming article.  Stay tuned.