This is the second in a series of articles describing the work the EJ volunteers are doing to prepare for the installation of an interior for first floor of the Middle City’s Grand Hotel.  This interior will include a lobby, a main staircase, and a restaurant.  Last month’s article addressed the furniture that would be used.  This month, we’ll look at some of the other interior details.

Any modeled scene of this type would be sterile without people to bring it to life, and the lobby area, which is the portion of the lower floor of the hotel closest to the EJ viewer, needed quite a few walking, standing, and sitting figures to make it look right.  Clothing appropriate to the late 1940s was the rule, with long skirts, fashionable suits, and some hats for the ladies (Figure 1).  Because many of the available figures did not have period clothing, some modifications were required, and all needed to be painted or repainted, at the very least to get rid of the shininess of their bare plastic or glossy factory-finish.  The pictures in Figure 1 provide a sample of the reworked figures.  They are shown small to simulate their appearance at their future location, more than ten feet away from the viewer.

Figure 1 The Standing and Walking Ladies

Figures of men were available in only a very limited assortment of poses, so again some modifications and repaintings were needed (Figure 2).  The hotel clerk got a black suit red tie and red carnation boutonniere (far left).  The restaurant maitre d’ got a black tuxedo with black bow tie and arms with hands not in the pockets (second from left).  The bellhop got a fancy red jacket with gold buttons, red stripes down the pants legs, a modified cap, and a suitcase to carry for a customer (third from left; do you remember the Philip Morris cigarette ad?).  The three guys on the right got new sport coats, but were allowed to keep their hands in their pockets.

Examples of some of the sitting customers are shown in Figure 3, in a variety of styles and types.  There was a shortage of available figures of men in sitting positions.

For the restaurant, there was a need for some tableware so that the tables with seated customers would not look unusually bare.  At the distance being viewed by EJ customers, it will be difficult to make out details, but it’s hard to determine how far these details can be dumbed down before they look wrong.  We opted for more, rather than less, detail in order to provide some three-dimensional and color characteristics that would make them more visible on the tables even at their substantial distance from the viewers (Figure 4).  The dishes are blue to contrast with the white tablecloths.  They’re made of metal washers or metal disks dented in the center by a punch, giving them an appropriate dished shape.  The glass is a piece of 1/8th inch clear shrink tubing, heated over a tapered punch to shape it.  It has no bottom and no contents.

The “liquid” is brown marker color applied to the outside.  The loaf of bread is half of a wooden bead.  The mug is a piece of plastic tubing with a shaped piece of plastic glued on as a handle.  The silverware is made from 0.020-inch mild steel wire, pounded flat at the appropriate locations and bent and filed to approximate shape.  The forks have no tines, the knives are dull, and the spoons don’t have a cupped bowl.  But, they do provide that three-dimensional characteristic when viewed at the shallow angle at which they will be seen when installed (Figure 5).

Figure 6 provides a long distance view, again simulating how the tableware might look at the greater than 12-foot distance that the restaurant will be from the layout aisle. 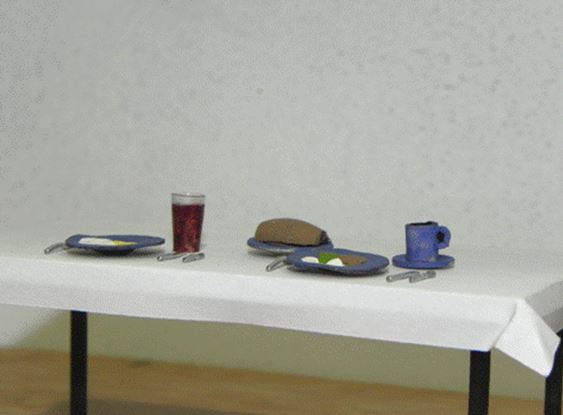 Our next task is to remove the frosting from the inside of the first floor windows of the hotel, otherwise, none of the interior would be visible.  And, all of this detail, of course, requires appropriate surroundings.  More on those next time.  I’ll let you know how it progresses, hopefully culminating with the interior’s successful installation in the building.  Stay tuned, there’s more to come.