The MVGRS team of EJ volunteers recently completed the upgrading of the lighting in the buildings in Middle Period City.  As we did this, we noticed that some of these buildings, especially those facing the large locomotive wheels across the aisle from the city, begged to have interior detail added to their ground floors.  The most notable of these buildings was the “Grand Hotel,” whose detailed lobby area would look so much better than just the frosted windows it currently has (See Figure 1). 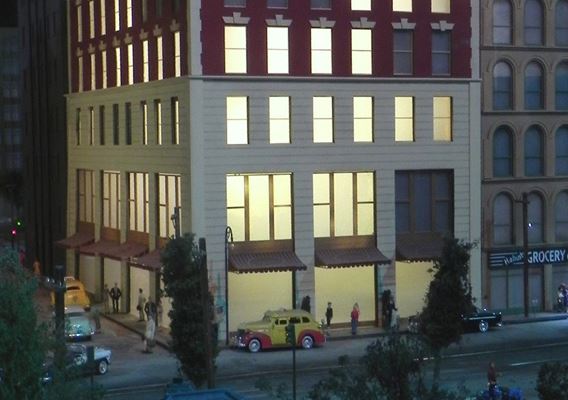 The Team chose this as its first interior upgrade project for the Middle City buildings.  After taking some detailed measurements of the hotel’s interior, its framework, its window dimensions and spacing, and the locations of the major vertical and horizontal view-blocking structure in the facade, the Team began the planning process.  The first questions that needed answers were what details should be included: a hotel desk not quite chest high; a set of cubbyholes behind the desk for room keys and messages; a “grand” marble staircase; elevators (it is, after all, a 14-story building); comfortable easy chairs for guests to wait to meet compatriots or just to just hang out; and oriental rugs on the marble floor and decorative wood paneling on walls and on the structural columns, to add warmth to the décor.  The hotel’s rectangular floor plan, with its narrow side to the main street and the longer side to a side-street, suggested the need for something other than just a lounge area in the rear portion of the long side, the answer: a restaurant accessible both from the hotel lobby and from the side street. The building also needed to have obvious entry doors from the street added; it currently has none.

With the basic concept determined.  It was time to experiment with the processes for making multiple copies of interior furnishings easily and quickly.  The first item we chose was the easy chairs.  The idea was to make about two dozen, which could be grouped in sets of four or six.  Extruded plastic insulating foam seemed the easiest material to cut and shape to the proper dimensions.  A scroll saw with appropriate fences and stops installed could gently cut the parts without tearing the foam.  A metal file, with its fine teeth, could add grooves and round corners, and a bit of gentle sanding with fine sandpaper would smooth any rough surfaces or edges.  Figure 2 shows the five parts.  The half-round strip in the foreground was for the rounded outer part of the chairs arms.  It was cut to length as needed during chair assembly. 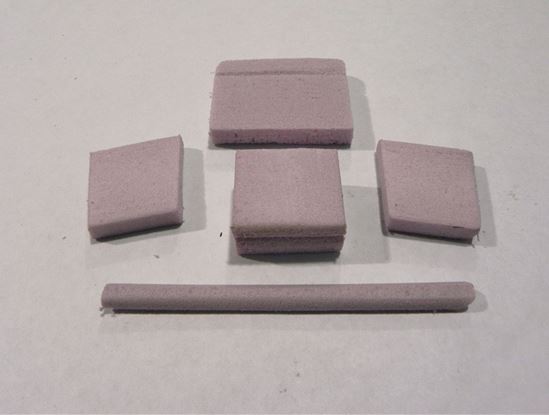 Two of the assembled chairs are shown in Figure 3, one bare and the other painted to simulate soft leather.  Small imperfections were not significant, given that these chairs would be viewed from a distance of more than ten feet away. 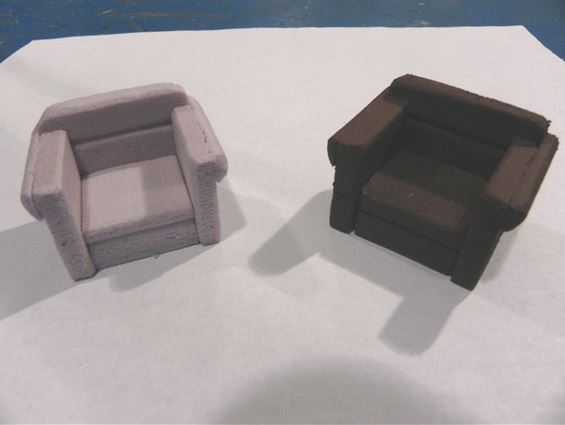 For the restaurant, there was a need for hard-back chairs for each of the dining tables.  Again, at least two dozen would be needed.  Fortunately, some four-piece clear plastic chair parts were left over from earlier EJ projects (Figure 4).  The parts had been cut by a computer-controlled cutting machine: two sides, a seat, and the upper back.  These were relatively easy to assemble using a fixture which would hold the parts in position.  Super glue was the adhesive used to glue the parts together, and a spray of super glue accelerator made assembly quick work.  The chairs were then spray painted to simulate dark wood. 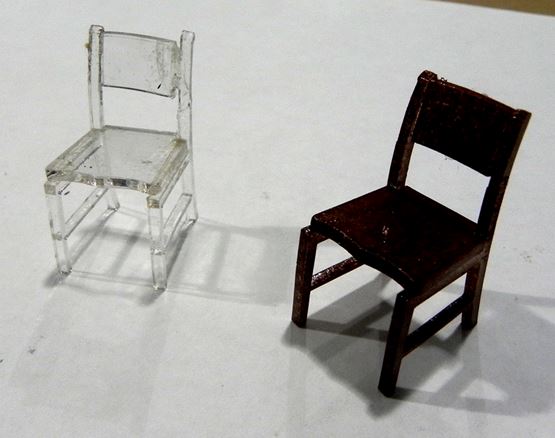 The restaurant also needed dining tables, and since it was to be a classy establishment befitting a “grand” hotel, the tables needed tablecloths.  For the small tables, a rectangular piece of plastic formed the table top with a single central post holding it up.  The tablecloth was cut from a sheet of paper and folded at the edges and corners to simulate the drape of the cloth.  (Figure 5) 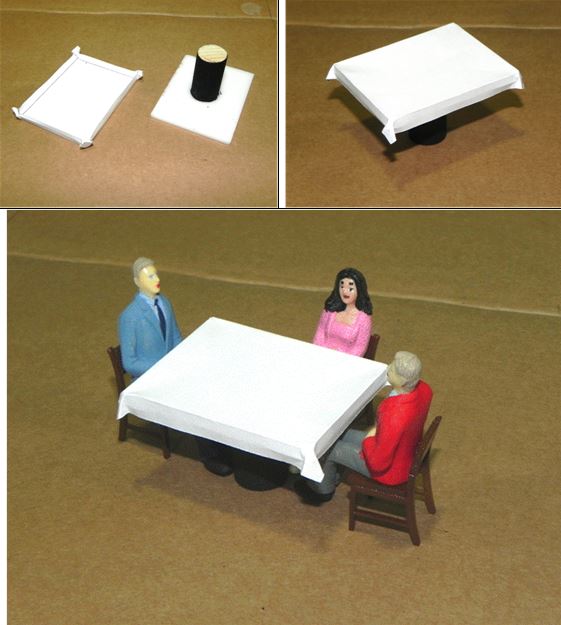 The large dining table had four legs made of finishing nails, cut to length, glued with super glue to the rectangular plastic top.  Again, a white paper tablecloth was folded at the sides and corners to simulate the drape of the cloth.  This table was large enough to accommodate six or even eight diners.  (Figure 6) 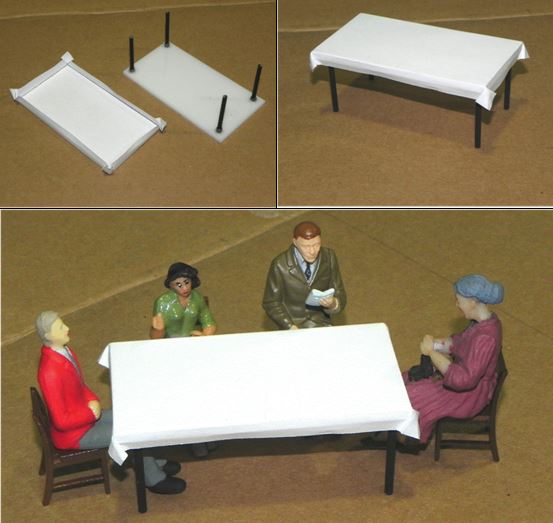 So, we’ve seen the start of the “Grand Hotel Project.”  I’ll let you know how it progresses, hopefully culminating with the interior’s successful installation in the building.  Stay tuned, there’s more to come.