Like last month, this month’s report will be a look back at the history of one of the scenes on the EnterTRAINment Junction (EJ) layout, showing how it has evolved over the years.  The choice this month is the “Modern Yard,” the last scene a visitor comes to before exiting the layout.  This too was initially designed and planned by the Miami Valley Garden Railway Society’s “Big Train Project” team of volunteers.  The pictures that follow are presented in chronological order and are shown with the date on which the photos were taken.

The area of our interest is shown in the red box near the center of the layout plan (Figure 1).  The Modern Yard is actually more than that; it models three major railroad activities: a freight car classification yard, a locomotive servicing facility, and an intermodal container transfer facility. 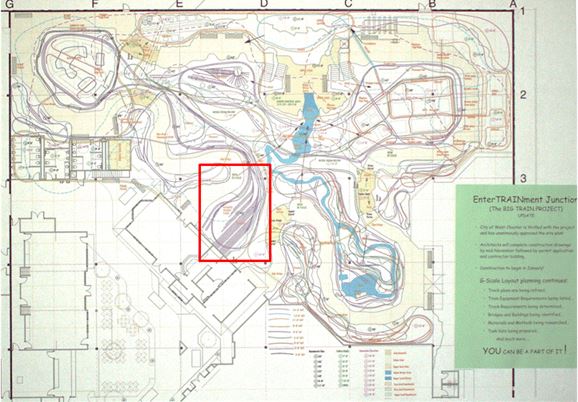 To visualize what this scene might look like, a planning model was created out of foam core board and paper, and included the scene-expanding mirror used to make the yard look bigger that it actually is (Figure 2). 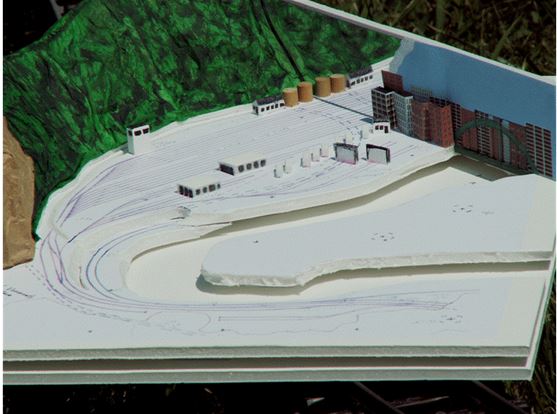 The layout table structure was installed in the summer of 2007.  The view in Figure 3 is from what would become the EJ mezzanine.  The blue wall in the background is the wall between the layout and the EJ gift shop, and it’s the location of the big mirror.  You’ll seen the yard again from this vantage point in what follows, because the mezzanine is the best location to get an overall view of the yard. 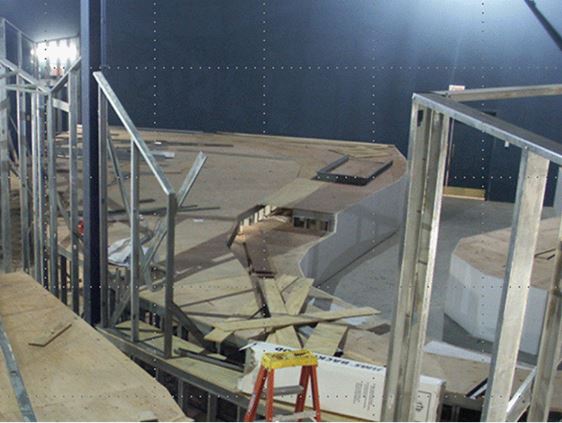 Figure 4 shows the beginning of track installation and the temporary installation of one of the mirrors (still partly covered by its protective plastic.  One of the cardinal rules of using a mirror in any model scene is that it cannot be located in such a way that the viewer could see him- or herself in it.  This was the case for the EJ mirror, which was too low to reflect directly back to the mezzanine and too far to the left to reflect back to the adjacent aisle, which is out of sight to the right of this view. 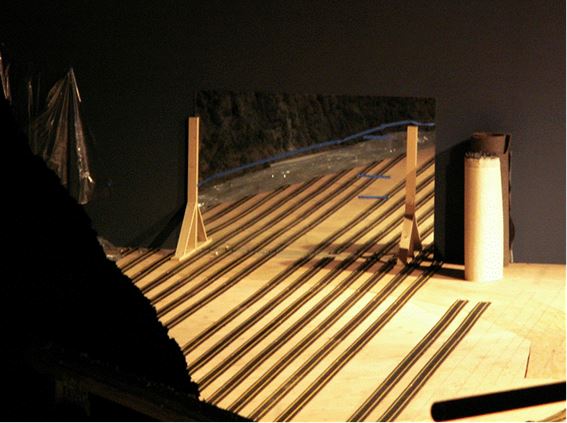 Though the photo in Figure 5 was taken a few weeks before the 1 Aug 2008 EJ Grand Opening, it shows what the yard looked like on opening day.  The mirror works pretty well as a scene expander, but its upper edge is very obvious.  Something was needed to hide it in a believable way.  Note the silver oil tank and its reflected companion and the containers in the intermodal facility.  The tunnel entrance at the bottom center is for the two-track main line that runs around much of the layout’s Modern Period. 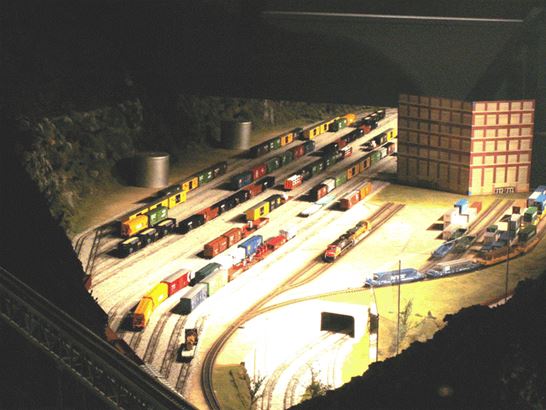 Fortunately, the top of the mirror was at the same height as “step” in the mountainside to the left.  That step would become a road, accessed by a road bridge which emerged from behind the building on the right, and that bridge was the device used to hide the top edge of the mirror (Figure 6).  In addition to supporting the road, one of the bridge piers did double duty by covering a seam in the mirror.  The façade building on the right was temporary, being replaced by a pair of façade buildings shortly after this photo was taken.  Note the addition of the cranes in the intermodal facility.  These were initially non-functioning.

2009 was a busy year for upgrades to the yard (Figure 7).  A large outdoor light globe was converted into a spherical water tank on a pedestal and installed (with its mirrored companion) near the oil tank on the far side of the yard (7a).  The oil tank had by then been modified to simulate having a floating roof and had been detailed by the addition of seamed panels and a cage-enclosed ladder.  An engine maintenance shed (7b) was installed in the engine servicing area and later upgraded to include interior lighting.  A sanding station (7c) was added to the engine servicing area.  And the container transfer cranes (7d) in the intermodal area were made functional, activated by a button on the aisle wall, executing a computer controlled sequence of movements, raising a container from a truck trailer or from a rail car and moving it the other of the two.  The next button press would move the container back to its previous location. 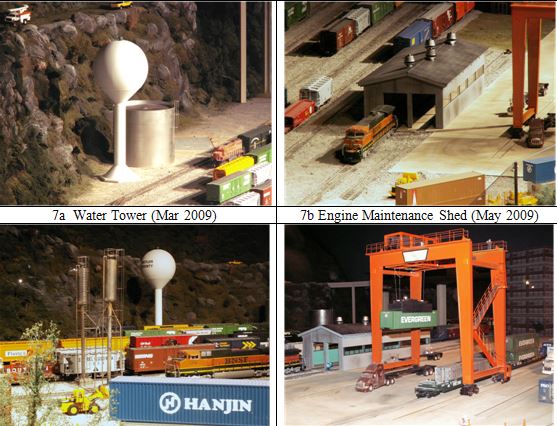 The next major addition, the yard’s control tower, wasn’t completed and installed until early 2011 (Figure 8).  Its shape was inspired by the tower in the Queensgate Yard in Cincinnati.  The non-moving simulated images on the video monitors were made by printing scaled photos of the Modern Yard itself or of individual locomotives in the Queensgate Yard onto overhead projector transparencies.  Note the figure of our EJ boss, with his green EJ employee shirt and his clipboard on the tower’s exterior walkway.  When we got complaints that there were more people in the tower than would ever be there during normal operations, we added a van labeled for a railfan tour company parked adjacent to the tower to simulate an on-going railfan tour.  That provided a reason for the “crowd.” 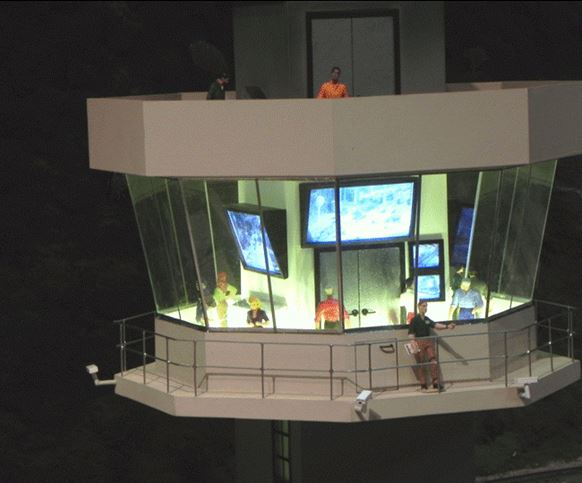 A summary of changes made in 2011 and 2012 is shown in Figure 9.  Light towers (9a) and a railway office building (9b) were added in the summer of 2011.  In early 2012, the two façade buildings were upgraded to include real windows, partial interiors with office furniture and employees, and interior lighting on all floors (9c).  The final change was the addition of the fueling station (9d) on the tracks leading into the locomotive maintenance shed. 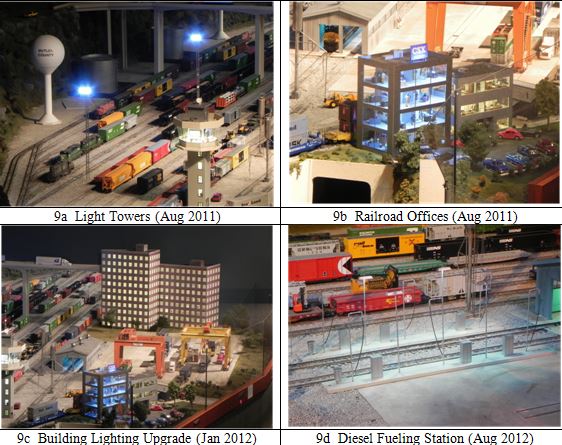 The last picture is an overview of the Modern Yard scene, which shows it complete, except for the addition of the diesel fueling station, which was installed after this photo was taken (Figure 10).

Like most scenes on the EJ layout, there’s a lot to see in the Modern Yard: exquisitely detailed models of buildings, facilities, and equipment; lots of action from cranes, trains, and locomotives, all moving at the push of a button; and the modeling magic of the mirror and the special care needed to hide the fact that it was a mirror.  That last has been successful, since more than one EJ visitor has looked for the extension of the yard in the gift shop.  All of these things showcase the wealth of creativity and modeling expertise of the EJ’s volunteers who contributed their talents to making this scene complete and realistic.
© 2015 Tom Bartsch
MVGRS Big Train Project Coordinator