This month we’ll again look at what’s new on the EnterTRAINment Junction Layout.  As usual the order of the items shown will be in the approximate order in which you’d see them as you progress along the aisle through the layout.

Up on the mezzanine, above the railroad museum theater, is a model of the Bates Mansion and the nearby Bates Motel (Figure 1).  The motel has been recently upgraded to include new lighting.

Two months ago, Report #86 featured a preview of Wood’s Grocery store before it was installed on the layout.  It has now been installed, in all its glorious detail, in the lower part of the Middle City, between the lumber yard and the feed mill (Figure 2).  That’s just across the aisle from the big locomotive wheels in the railroad museum.

A new addition behind the lumber yard is an old passenger car without trucks which has been converted into a Reading Railroad office.  On the other side of the mainline tracks from it is the newly added Zost Machine Shop with its unusual red lighting (Figure 3). 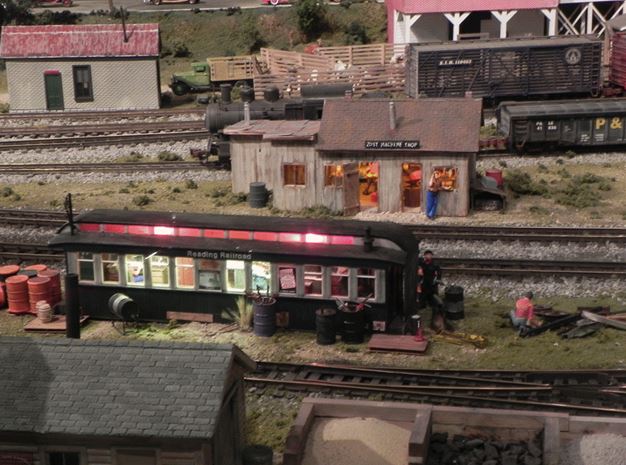 A new trackside shack has been added between the Zost Machine Shop and the scrap iron yard.  Its interior is furnished and lighted and has an appropriate collection of tools and accessories.  It also includes the figure of a man drinking from a very large (in scale) bottle (Figure 4); “Prost!” 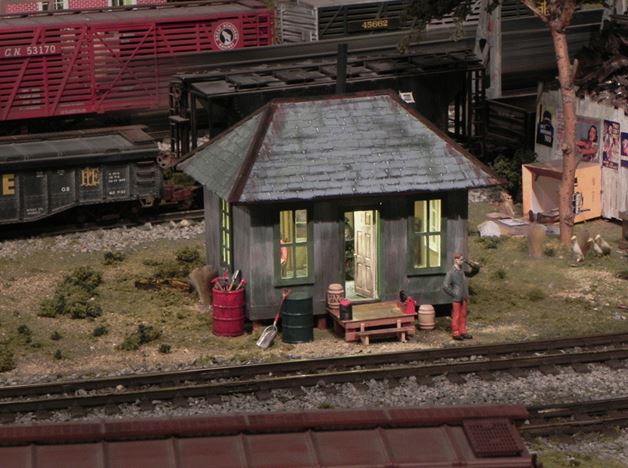 Up on the mezzanine, the tracks serving Coney Island have new trolleys.  These are two-truck cars, much larger than the four-wheel trolleys used previously.  They have two-window flat fronts (left in Figure 5) and three-window rounded rears (right in Figure 5) and doors only on the right side; classy.

The Natural Bridge replica has also received an upgrade.  There are more tress, and model tourists enjoying the view have been added (Figure 6). 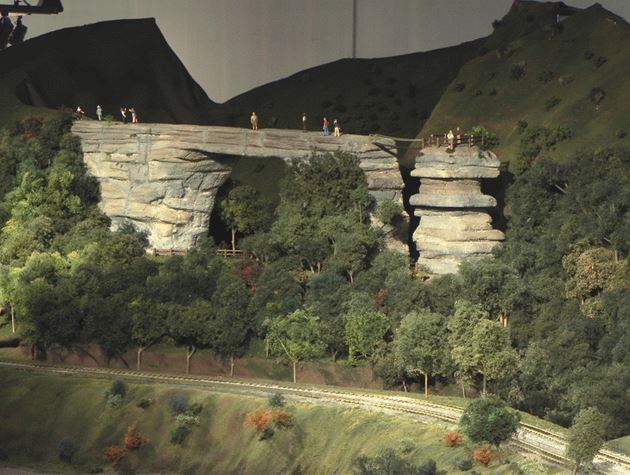 As always, the upgrades and updates to the layout continue.  Some of the changes are not so visible, including the replacement of some worn mainline brass track, which has been in continuous service for almost six years.  It’s being replaced with stainless steel rails.