This month we’ll look at two things of note on the EnterTRAINment Junction (EJ) layout.  The first is the annual Christmas layout.  The second shows some of the methods of upgrading the interior lighting of buildings in the Middle Period city.

The Christmas layout is an annual feature, set up at EJ each November in EJ’s display area.  This year’s layout has three loops of track on three levels (Figure 1).  It includes a waterfall, some towns, and a number of bridges.

One of the new features is lighting in some of the layout’s buildings (Figure 2). 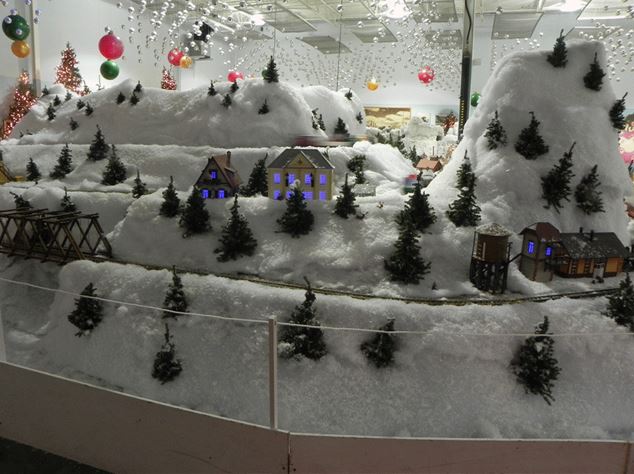 The second subject of this article shows you some of techniques that have been used to upgrade the interior lighting in Middle City buildings.  The lighting in most Middle City buildings, especially the large ones on the upper level in the central part of the city, consist of one or more 12-volt LED “bulbs,” made up of multiple LEDs around the sides and on the ends of the “bulbs” (Figure 3). 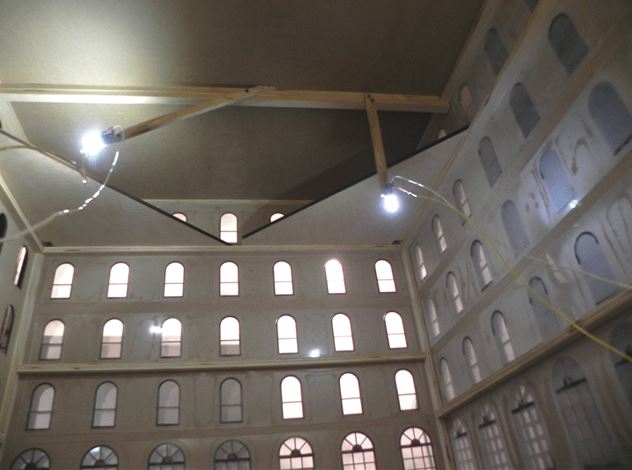 This lighting method has some undesirable side effects.  It isn’t very bright, and it creates hot spots (Figure 6a) which move unrealistically behind the buildings’ frosted windows as the viewer moves relative to the building.  Instead of lights in separate rooms and on separate floors, as one would expect of a real building, the hot spots appear to move unrestricted by such interior limiters.

The primary objectives of upgrading the interior lighting was to brighten the interior lighting and eliminate the undesirable hot spots.  Creating interior rooms and floors, each with their own lighting, takes a lot of work, is very expensive in the use of materials, and is very hard to do in buildings which are fixed in place.  The solution chosen for these buildings was similar to the lighting technique used in some of the background buildings in the Modern City.  Lights would be mounted to each wall having windows needing to be lit, with the lights facing away from the windows rather than toward them.  The 12-volt strips of three LEDs lights were mounted on wooden bars fairly widely spaced (Figure 4, showing the interior of the Fox Theater seen from below).  The wooden bars were then mounted on the inside of the building’s walls.  The lights would shine on curtains made of 18-inch wide freezer paper on the matte side rather than the shiny side.  The purpose again was to diffuse the light without creating reflective hot spots.  The curtains were suspended about 10-12 inches from the adjacent wall with the lights and parallel to it.  The curtains were weighted at the bottom with a wooden rod to keep them vertical and to align the 18-inch wide strips.  To prevent direct view of any of the lights through the windows of the adjacent wall, it was necessary to extend the reflective curtains into the corners of the building at about a 45 degree angle.  The interior structure of the building included some triangular gussets which were there to ensure the correct angle between the walls.  The gussets interfered with the angled curtains in the building’s corners, so separate secondary supports were needed to continue the corner curtains below each of the gussets (Figure 4). 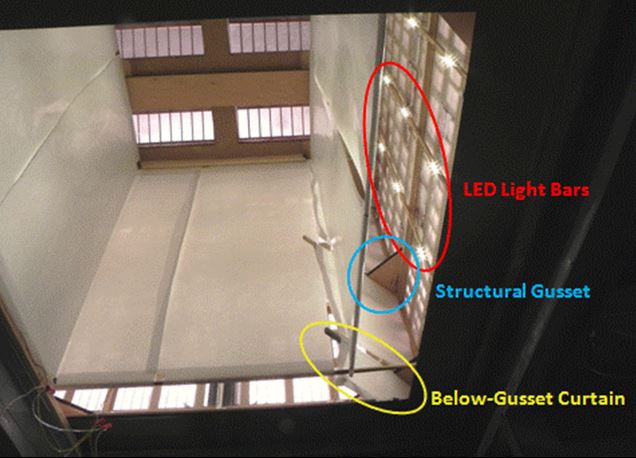 The building adjacent to the Fox Theater is rectangular (Figure 5, again seen from below), rather than square like the Fox Theater.  Only two of its walls had windows readily visible from the EJ aisles.  This allowed a reduced number of curtains, reflecting lights from only the two visible walls.  The curtains were suspended at angles to the windows.  This simplified the installation.  Because the building’s width was narrow width of the building, it kept the curtains acceptably close to the lights, despite the angle.

Having developed viable techniques for upgrading the lighting, the EJ volunteers are now planning to apply those techniques to some the other Middle City buildings.  One of the most challenging of those buildings is the one across the street from the Fox Theater (on the right in Figure 6b).  This building is over seven feet tall above the street level.  And, there is no way for a worker to reach the upper floors inside, because there is no way to work a ladder in through the under-layout structure and up through the small access hole in the base of the building.  Even so, with a little bit of volunteer ingenuity, the lighting will be upgraded.  Stay tuned.  I’ll report on the results in a future article.