This month we’ll look again at recent changes to the EnterTRAINment Junction (EJ) layout.  As usual, we’ll look at the features in the order in which you’d see them as you follow the aisle through the layout.

The first new addition comes from the “founders” of the town of Mott Junction.  They tell the story in the following and provided the photo in Figure 1:

“Unlike the bear on the cliff overlooking the town, the good people of Mott Junction will no longer have to poop in the woods.  On September 25, a new single-hole outhouse was installed behind the FCSME Freight Company and the town folk couldn’t be more thrilled.  The first lucky patron was photographed in the stall as soon as the last boards were nailed in place.  He was so excited he dropped the toilet paper on the floor between his feet.

The outhouse was scratch built by Bob Mott Jr as a recent birthday present for Bob Mott Sr, who has been lobbying for a Mott Junction outhouse for over four years.  The facility was constructed from individually-stained basswood boards which were then painted with white artist oil paint diluted with acetone to provide an aged look.  The door has operating brass hinges (each held in place by tiny little nails), brass door knobs, and the obligatory moon carved in the door.  The toilet paper and vent pipe are plastic tube from Evergreen Styrene.  The tarpaper roof has a couple of “wear” holes to provide light to see the interior.  The gentleman patron is a PG-rated figure because his pants are still all the way up.

The location quite near the tracks should provide a great deal of excitement for outhouse patrons every time a train blasts out of the tunnel.  Look for the new addition the next time you are at EJ!” 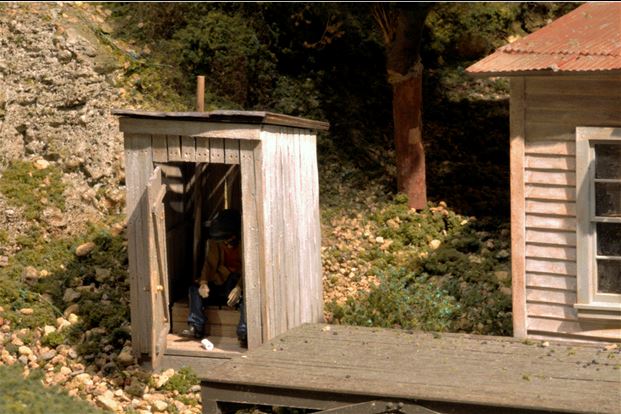 The second new detail is the interior of the Woolworth store in the Middle City.  The frosting on the windows has been removed so that the interior becomes visible.  Figure 2 shows only a small part of the entire area of the first floor of the store, which has been detailed, with new lighting, displays of merchandise, signs, and lots of eager customers. 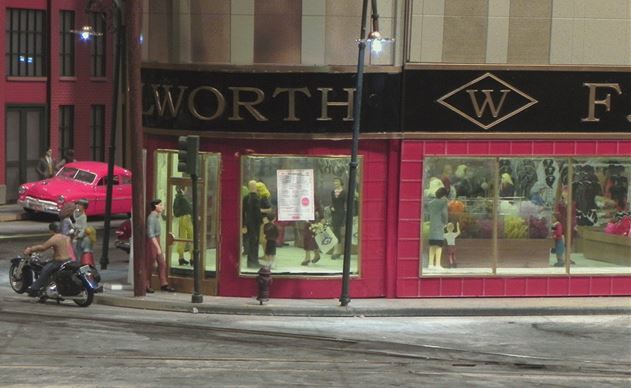 Just down the street from the Woolworth Building, just past Union Station, is the Fox Theater Building.  This is one of the two Middle City buildings whose interior lighting has been upgraded, so far, from the two LED lights (seen as the bright spots behind the frosted windows in the left portion of Figure 3).  The new lighting uses vertical strips of more widely spaced LEDs, mounted on each wall, shining their light away from the windows toward a reflective curtain, the flat versus the shiny side of white freezer paper.  This produces brighter light for about the same number of LEDs and diffuses the light much more evenly (right portion of Figure 3).  It also eliminates “hot spots” of lights seen either directly or as reflections off a shiny surface.

Figure 3: Before and After Revised Interior Lights

In the Modern City, one of the crossing gates protecting the road leading from the parking lot for the main underground subway station was damaged (by an overeager driver, or was it a derail?).  So while the gate and its underground operating mechanism are away for repair, CSX has provided a “manual” traffic controller, complete with his stop sign and his truck.  The latter also happens to be a convenient way to hide the hole left by the removed mechanism (Figure 4). 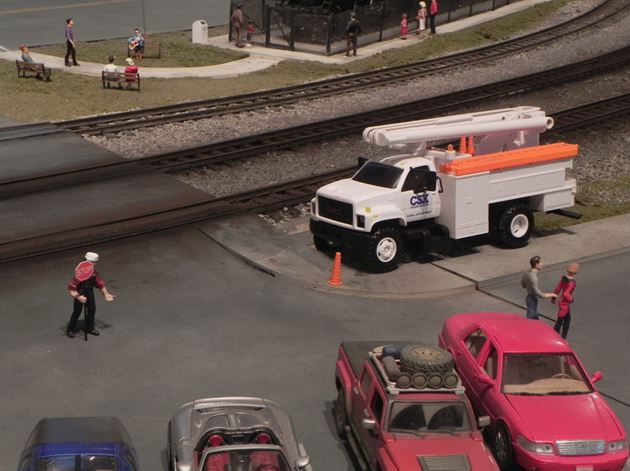 The welder who appeared in article Number 77 now has been blessed with a whole yard full of material to use for his craft (Figure 5).  You’d be surprised by how much work there is in modeling believable junk. 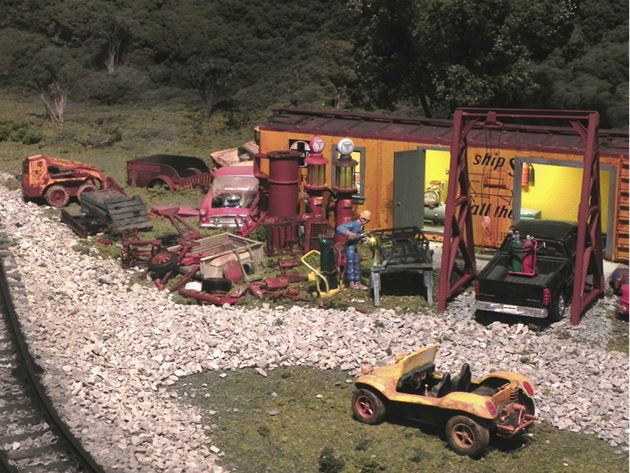 The last new item in this article is the cement storage and distribution facility (Figure 6).  It’s across the tracks from the plastics factory not far from the entrance to the Modern Yard.  It’s another great model based on photographs of the real thing. 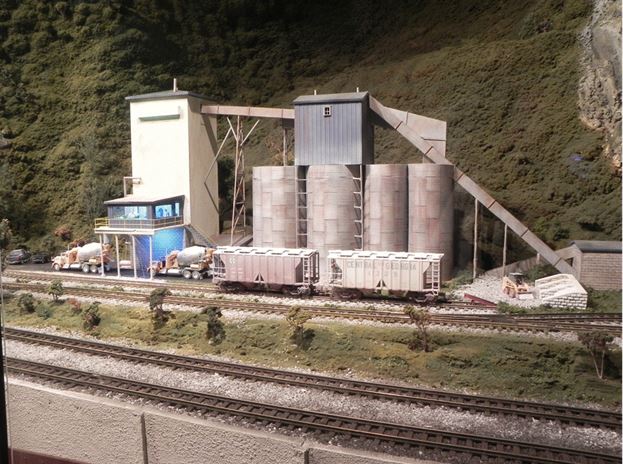 Still improving, it’s likely that we’ll never be completely finished.  But that’s the beauty of having such a great layout to work on.