With all the attention I paid recently to the Coney Island model, I haven’t had the chance to give an update on some of the other changes that have been made to the EnterTRAINment Junction (EJ) layout.  As part of the upgrade of the mezzanine area, which included the Coney Island model, the entire mezzanine area above the railroad museum has been covered with scenery, buildings, and both railroad and trolley lines.  Across the aisle from the Middle City’s Union station, are the buildings shown in Figure 1.  The horizontal blurs in the photo are from the passing train on the lower tracks and the passing trolley on the upper tracks.  The trolley runs all the way to Coney Island and back, while the train stays at its lower level, and is not visible at Coney Island. 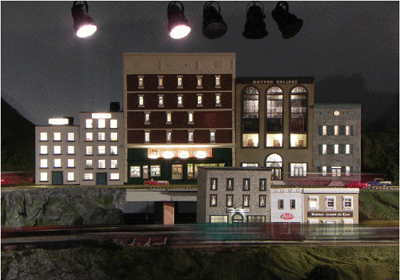 Farther along the aisle, to the left of the buildings shown in Figure 1, are a set of suburban houses served by the trolley line at the bottom of the embankment (Figure 2).  With those steep steps, it’ll be a tough haul bringing the groceries up from the trolley stop. 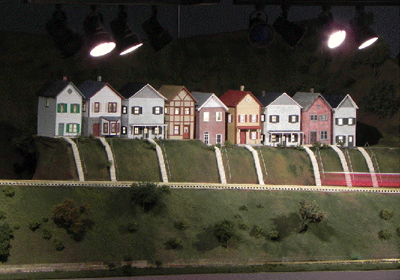 Still farther along, to the left of the houses in Figure 2, stand a pair of models recognizable by fans of old Alfred Hitchcock movies: the Bates Motel and the Bates Mansion from the Movie “Psycho”™ (Figure 3). 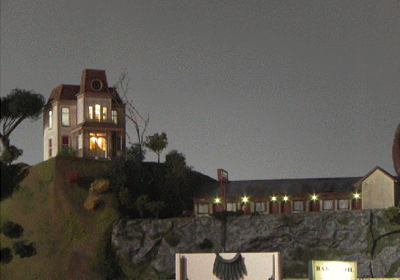 Something not new, but newly visible, is the garage and gas station behind the main part of the Middle City, near the hillside that leads up to the mezzanine.  A change to the city’s lighting now allows visitors to see this beautiful model much better.  The view in Figure 4 is from the aisle across from the big locomotive wheels, admittedly at a bit far for any but the most sharp-eyed viewers.  However, it can also be seen much better now looking down on it from the mezzanine. 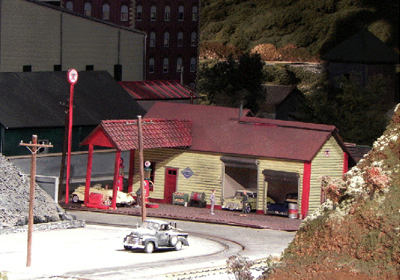 A new detail added in front of the entrances to tunnels in the Middle Period are the tell-tails, which on Middle Period railroads were designed to warn train crew members (brakemen) on the roofs of rail cars about the tunnel or low overhead obstruction ahead (Figure 5).  You won’t find these in the modern period, because crew members are no longer allowed on top of a moving train.

Finally, in the Modern Period, in the industrial area across from the modern city, there is a new detailed scene of a metal worker with his acetylene torch working on a metal framework (Figure 6).  The flame on the torch is simulated quite realistically by a flashing light. 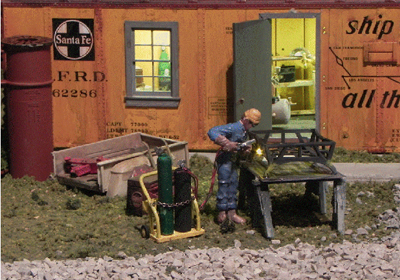 As you can see, the addition of details both large and small continue to enhance the layout, adding a bit of realism here and there, an occasional bit of humor, and a sense of completeness.  You’ll see such changes continue to be made as new ideas for making the layout better are developed and implemented by the team of talented volunteer modelers.