This time we’ll focus exclusively on EnterTRAINment Junction’s (EJ’s) model representing Cincinnati’s Coney Island amusement park, showing how it looked in the 1960’s.  The model is located on the mezzanine opposite the windows and adjacent to the elevator.  This was a major addition to the layout planned to be ready by the time for the visit by the conventioneers from the National Garden Railway Convention, held at the nearby Great Wolf Lodge near the King’s Island, from the 5th to the 9th of June 2013.  The pictures presented here show the model still incomplete, but it’s very likely that most of it will be done in time for the convention.

Like a visit to most such parks, we’ll start at the main gate (Figure 1).  The street in the foreground represents Kellogg Avenue.  While the real Coney Island didn’t have a trolley line running past it, this is, after all, a model railroad layout, so we’re allowed some modelers’ license. 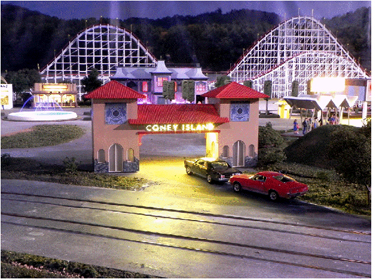 The panorama in Figure 2 shows most of park.  The main gate is to the left.  In the center foreground are the Turnpike and Train Rides as well as a “selectively compressed” Lake Como.  The main feature is, of course, the working model of the Shooting Star roller coaster, which spans almost the entire length of the model.  It’s a high Mach Number, high “g” ride sure to set the riders’ cheeks to fluttering, hair to streaming, and bones to groaning. (I’m kidding, of course, but the effects of scaling have made is an exceptionally f-a-a-a-a-a-a-st ride that’s pretty impressive to see in operation.  If you don’t pay attention, you’ll miss it.)

The Lost River ride (Figure 3) is another of the animated features of this model.  It’s mostly an “indoor” ride, but with a final hair-raising climb and eye-popping drop in the open into a splash pool.  (No, the splash isn’t modeled.) 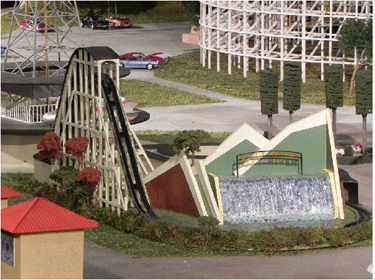 The Moonlite Gardens dance hall is another of the modeled attractions.  Looks like the night is still young – not a lot of customers yet. 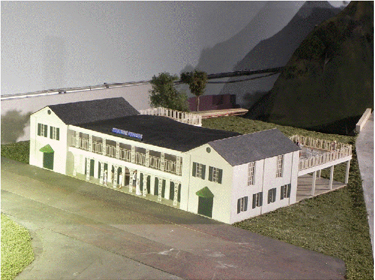 One of the features of the Train Ride is the Settler’s Cabin with the lady of the house churning butter and a caldron over the fire (Figure 5).  Is that going to be stew, or is she just doing the wash?  To add to the ambience of the Train Ride there are also some Native Americans in full regalia and a teepee in the surrounding woods.  Did they come for the stew?

Last, but not least for this report, is an interesting model of the “Games” building (Figure 6).  This is not an exact replica but is just intended to represent the style and form of one of the actual buildings which stood along to Coney Island’s central midway, a pedestrian boulevard with sculpted trees, hedge-bordered flower beds, and benches for the patrons to sit and rest those tired feet.

The model building is a bit unusual, because the side you see in Figure 6 with the detailed and lit interior can’t be seen by EnterTRAINment Junction customers.  You may ask, “So, why all the detail if it can’t be seen?”  And I answer, “Figure 6 illustrates the reason.”  You see, there is a possibility (and the probability is now 100%, as Figure 6 proves) that some photographs of the park model may be taken from the side opposite the EJ customers’ view, and a building with a blank wall facing the midway would look very very wrong.  So, for us photographers and for you the viewers of our work, the EJ volunteers went the extra mile to make it a model that’s right for the scene.  It has addressed the potential and met its purpose already, at least once – in this article. 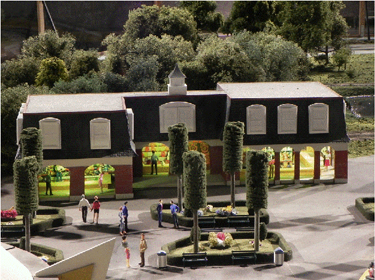 By the time you read this, the Coney Island model will be still farther along toward completion.  The Turnpike and Train Rides should be operating and the Skyway over the midway should be installed.

It’s a great model to see and enjoy; and, if you ever visited Coney Island years ago, you may recognize some familiar features, hopefully, bringing back pleasant memories of your visit.