In this article, I’ll be going in a completely different direction than is usual for my status reports about the EnterTRAINment Junction (EJ) layout.  We’ll be looking at the history of an itinerant model building, whose multiple locations make it unique among all of the buildings on display at EJ.  Instead of a sequence by location, I’ll be using a chronological sequence of the dates when the photographs were taken, which, of course, also coincide with some of the dates that it was actually at the locations shown.

Those of you who remember the EJ layout from opening day in August of 2008, will remember the Capitol Building in the Modern City, at the top of the boulevards sloping up from the encircling railroad tracks.  It was designed and constructed by the EJ volunteers from the Miami Valley Garden Railway Society.  Figure 1 shows it the first time it was completely assembled, in one of the volunteer’s living rooms, still incomplete, with no windows or lighting.  It’s no small structure, requiring an 8 by 2 foot space.  Built in three main sections mostly of ½-inch Gatorboard®, it’s actually very light weight for its size, a feature which probably contributed to the ability to move it fairly easily to and from its multiple locations. 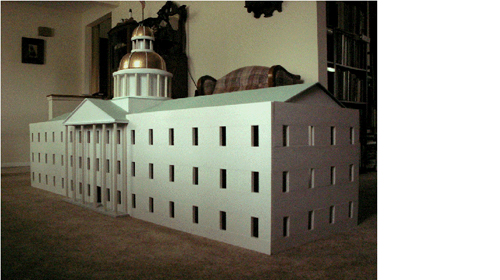 One of the prominent features of its original location on the EJ layout was that it could be seen by looking up all three of the streets leading to the traffic circle, with its central fountain, at the top of these three streets.  The primary view looked directly up Capitol Drive from the main subway station.  The other two views were indirect, with the main portico and dome reflected in the mirrored windows of adjacent buildings (Figure 2). 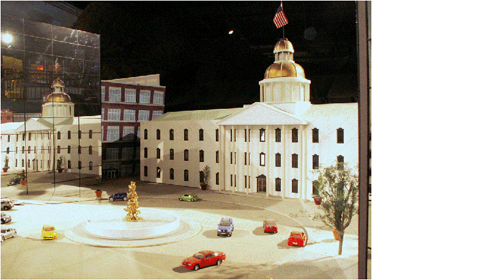 In the latter part of 2010, the Modern City underwent a major renovation.  When finished, gone were the sloping streets and the foreground buildings made of Gatorboard with printed façades.  They were replaced by new modern skyscrapers with interiors and lighting.  That prompted a major renovation of the Capitol Building as well.  Added moldings, new roof detail, interior lighting, and lighting for the dome and flag greatly improved its appearance.  The lighting was added to enhance the look for the day-dusk lighting cycle being planned for the entire layout.  The building spent a few weeks on a table in the EJ workshop getting its upgrade (Figure 3). 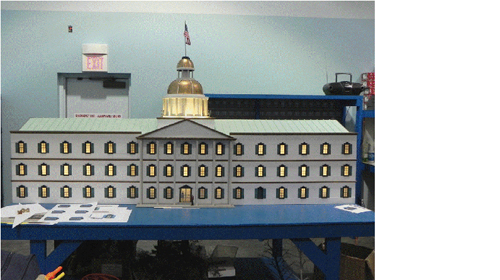 With the upgrade complete, the Capitol was installed again in the Modern City at the meeting of all of the streets in the city’s center (Figure 4).  Unfortunately, that installation was short-lived, as this building was replaced by a newly constructed baroque-like domed building, which provided a curious architectural counterpoint to the modern style of all of the other buildings in the Modern City. 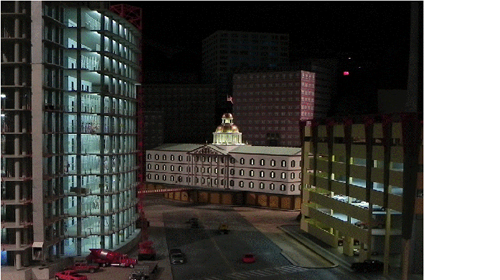 The Capitol Building was placed in its current location (see Figure 6) for a while, but when work was started preparing the mezzanine for scenery, there was an opportunity to provide it some better and more complete exposure by temporarily installing it on the mezzanine at the end closest to the aisle tunnel leading to the Modern Period of the layout (Figure 5). 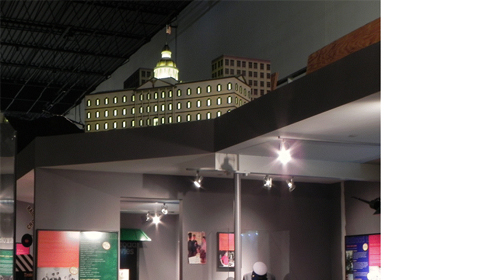 Its fifth location as well as its current (seventh) location are in the same place, overlooking the Modern City from the hills above the aisle tunnel where the layout transitions from the Middle Period to the Modern Period.  In this last location, it sits atop an elevated platform so that more of it is visible in the gap in the hills (Figure 6). 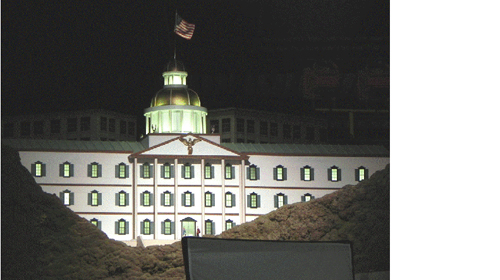 Some buildings have multiple “lives” on the EJ layout, though none have yet seen as many different locations as the original Modern City Capitol Building.  Look for it the next time you visit.