As promised last month, this month’s article showcases the 1/24th scale model circus loaned to EnterTRAINment Junction (EJ) by Richard and Twyla Schillhahn of Springfield, Ohio.  The model is located in the entry to EJ’s fun-house, and is by itself worth the price of admission.

As is customary for EJ models, this one is also protected by a Plexiglas barrier to keep the fingers of the curious away.  Figure 1 provides an overview of the scope of what Richard has modeled.  The two tents are cut away to show the superb interior details.  Also, Richard has included all of the support vehicles needed to transport this itinerant show. 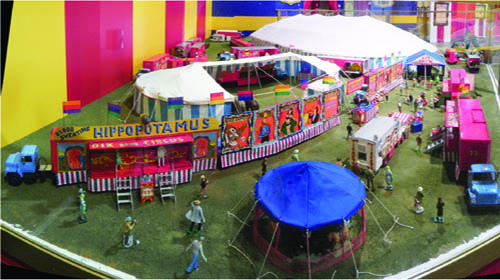 The main tent has three rings with their simultaneous shows, as is common for Circuses in the U.S. (Figure 2).  In addition, there are the clowns, the band, an elephant parade, and plenty of seating, including bleachers and hundreds of individually modeled folding chairs.

Figure 2.  Inside the Main Circus Tent

At one end of the tent is the “Human Cannonball’s” launcher with the “Cannonball” standing proudly at its front (Figure 3). 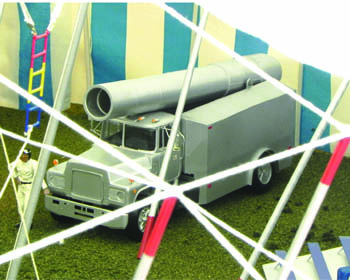 Figure 3.  The Human Cannonball and Cannon

The Lion Tamer is very busy putting over a dozen of his big cats through their paces (Figure 4).  Equestrians and a tightrope walker occupy the other two rings. 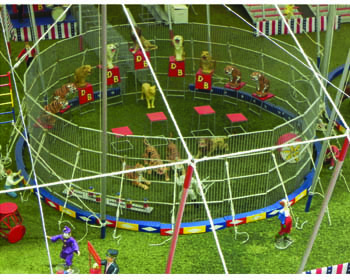 No circus would be complete without its “midway” of games and attractions, including, of course, the souvenir stand with flags, balloons, stuffed animals, and other treasures (Figure 5). 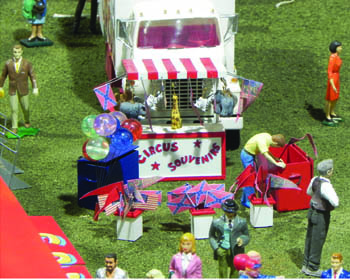 These are just a few of the outstanding details Richard has included in this huge display.  There are many many more.  Come see and enjoy the display, taking the time to explore and appreciate its many facets.