This month we’ll look again at what’s new.  As usual the order of the items shown is in the order you’d see them as you progress along the aisle through the EnterTRAINment Junction (EJ) layout.

On the Mezzanine above the theater, there’s newly built mountain structure which is in the process of being covered with poultry wire in preparation for being covered further with paper and then ground foam (Figure 1).  Just a bit farther to the right, out of this view, buildings are being installed to give an origin and destination for the trains which will run along the mezzanine’s edge. 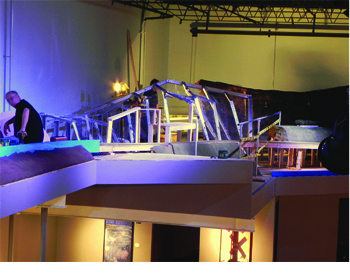 Looking to the left of the Coney Island park, the mountains are farther along in their decoration, and you can see part of the trolley line which will bring customers to the park (Figure2).  The lower tracks will connect to those along the mezzanine edge on the other side of the park. 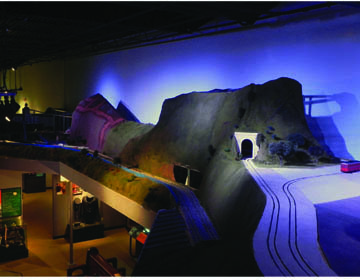 Across the aisle from the Modern City, adjacent to the entrance to the EJ display area, the Model Railroading display shows off various types of modeling (Figure 3).  In the center are number of models which employed a number of construction techniques.  These helped to visualize what sections of the EJ layout would look like and how parts of it would fit together with the underlying structure.  They were used for planning and, in some cases, actually guiding the construction of the layout.  On the right is a sample of layout support structure (top) and a beautiful example of some very realistic HO scale scenery (bottom). 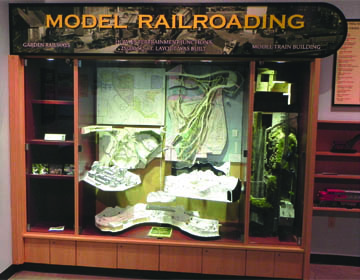 A layout feature that had been part of the initial layout plan has finally been incorporated, and marvelously so.  It’s to the left after you exit the tunnel when heading away from the Modern City. At the touch of a button, a hot air balloon now travels down to almost land next to its chase crew, the SUV with trailer in the foreground (Figure 4).  Its flight is accompanied by appropriate wooshing sounds of the burners.  Alas, the poor balloonists are doomed to fly forever, because the balloon never touches down.  Even so, it’s pretty impressive, a great dynamic addition to that part of the layout. 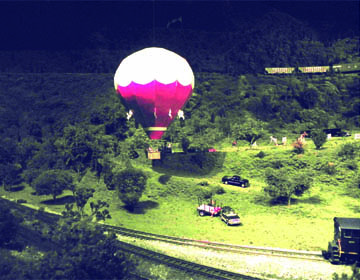 A new display was being installed in the entry to the EJ Funhouse on 18 Feb 2013 by Richard and Twyla Schillhahn of Springfield, Ohio, who are lending it to EJ.  It’s a beautiful scale model of a circus.  I just got to see the beginning of the setup (Figure 5), but it promises to be fabulous.  By the time you read this, it should have been completely set up.  I’ll devote a future article (or more) to show you the details, but as you can see, it’s huge! 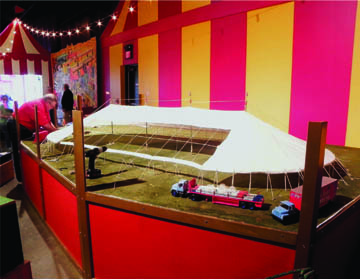 To give you an idea of the quality of the modeling and the level of detail Richard has applied to his work, Figure 6 shows just one of the circus elements, the band in mid performance.  Note the folding chairs; Richard made hundreds of them for the circus patrons as well as for the band. 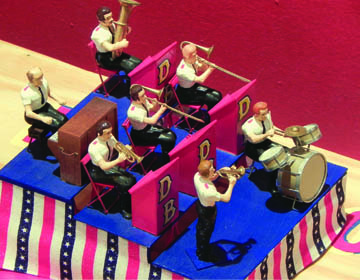 As has been the theme of many of these articles, you can see that EJ continues to evolve and improve.  And, that gives you a good reason to come back if you’ve already visited or an even stronger reason to come if you haven’t seen it yet.  You won’t be disappointed.