One of the new features which has been recently introduced into the EnterTRAINment Junction (EJ) layout is day-dusk lighting cycle.  This highlights the lighting details which has been incorporated into the models in all parts of the layout and accentuates the interior details included in many of the buildings.  The “daylight” lasts 15 minutes and the dusk, with its dimmed and blue tinted lighting, lasts 5 minutes.  The pictures below will show comparable views of the same scenes to give you some idea of the effect.  As usual, the order in which I present the selections is in the order in which you would see them as you progress along the layout’s aisle.

The first example is the town of Mott Junction, which is the first scene you see as you enter the layout (Figure 1). 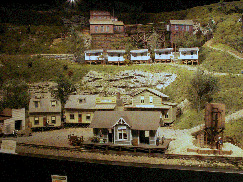 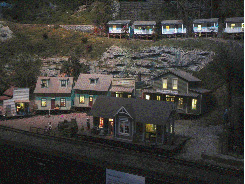 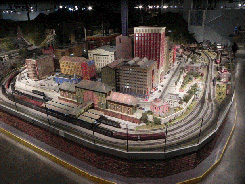 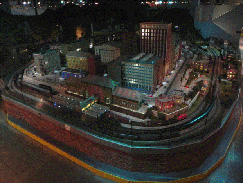 Representing the days before modern high-intensity floodlights, the Middle Period engine servicing facility looks like it depends primarily on moonlight at night (Figure 3).  Even so, the details are brought to life by their individual lighting. 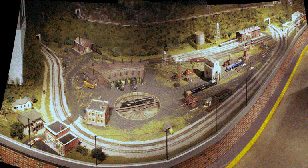 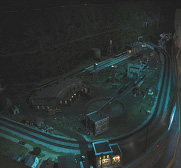 In the Modern Period the city is well lit, but surrounding lighting of light colored walls and the lights in the display area don’t really provide the contrast that showcases the distinction between daylight and dusk.  On the other hand, the Modern Yard and surroundings show off that contrast quite well (Figure 4).  Here the brightness of the floodlights actually does provide some of the illumination when lights are low. 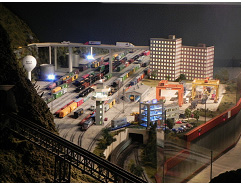 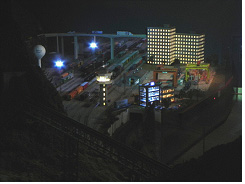 Needless to say, there is much still to be done to light unlit buildings, add exterior lights, or to improve the lighting in buildings where it’s currently not very effective.  The preferred lighting is via light emitting diodes (LEDs) which are more compact, very reliable, and require less power than incandescent or fluorescent lights.  However, the LEDs have to be used in sufficient numbers and with appropriate spacing to be effective.  Installing and wiring them to nearby power sources is no small task for one building, not to mention the dozens that still need to be lit.

We’re working on it, but it will take a while.  In the meantime enjoy what’s already done.