The end of the year often brings with it summaries and retrospectives, and the concept of the top-ten list can be a useful framework for addressing a subject of interest.  So, what follows is a top-ten list of what I personally believe are the most noteworthy elements of the EnterTRAINment Junction (EJ) layout.  This is, of course, just my opinion, but I base it on a few criteria that have some objective merit.  First, is the modeling of excellent quality as it appears to EJ customers?  Second, does it represent a high degree of creativity in what it represents and how it was implemented?  Third, does it show a careful consideration of the subject it models and its place on the layout by which details it includes and which it does not?  Does it represent a significant effort by the modeler or modelers to achieve the final result?

As usual the order in which I present the selections is in the order in which you would see them as you progress along the layout’s aisle.  It is NOT in the order of goodness.  Also, the photographs shown here are merely to identify the elements.  They cannot do justice to the actual models.  You need to see them in real life to appreciate their greatness.

The first selection is the Mott Bridge, which EJ customers see right after they enter the layout (Figure 1).  Not only is it a highly accurate and magnificently detailed structure, but it also represents great creativity in how it was integrated into the scene, given the limitations which the scenery imposed on its configuration.

The second is the drawbridge where the river flows out of the lake at Riverbend (Figure 2).  It again embodies significant detail and represents an enormous amount of work on the details to make it look realistic.  (You don’t want to have to count the individually applied rivet heads.) 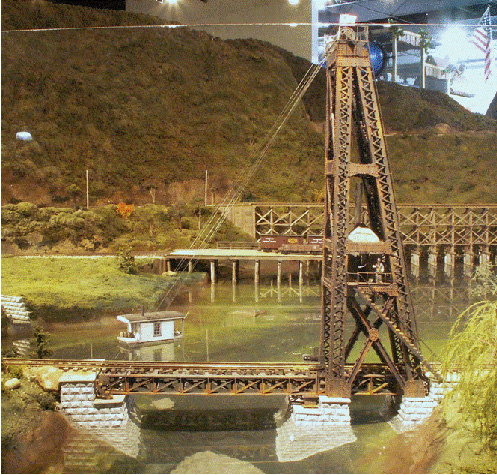 Figure 2.  The Drawbridge at Riverbend

The third selection is the riverboat City of Monroe, moored at Riverbend (Figure 3).  It’s an imposing sight, and it too includes a myriad of details which bring it to life.

Figure 3.  The Steamboat City of Monroe

The fourth model is the open air market next to the fire house in the Middle Period city (Figure 4).  It includes a wide variety of different types of details all beautifully integrated into a readily recognizable and very believable scene. 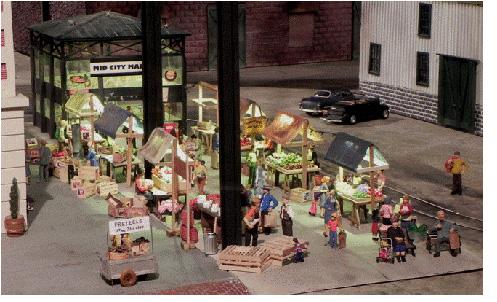 The fifth model, the Kitterman Construction compound adjacent to the drive in theater, was selected primarily for the creativity of its concept: the models-in-a-model, which pays homage to John Kitterman, who produced most of the large buildings on the layout.  But it’s not just the concept.  The quality of the modeling and wealth of details both outside and inside the Quonset hut deserve to be studied through closer observation.  Again the photo does not come close to doing justice to the excellence of this model. 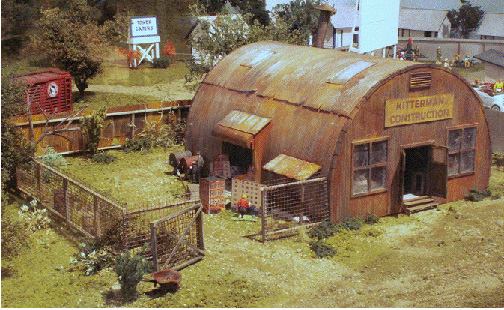 When I first saw the model, which I selected as number six, installed on the layout, I was blown away by wealth of detail included and the excellence of the how the application of those details was carried out.  The dry goods and grocery stores near the Middle Period roundhouse have it all (Figure 6).  From the store’s logo on the customer’s shopping bag, to the wall of shoe boxes, with the rolling ladder needed to reach then, to the racks of shirt and tables with lunch boxes, to the meat counter, produce racks, and brand name products on the shelves, to the signs on walls and windows, this model yells at you about the superb attention to detail which the modeler applied. 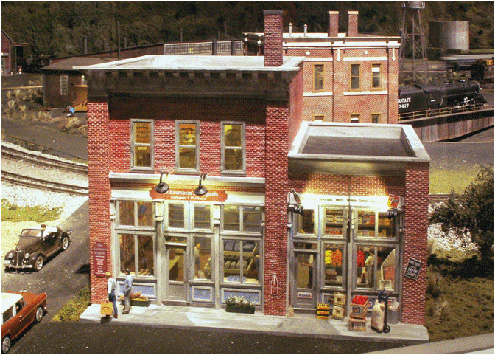 Selection number seven comes in a set of three, the Modern City subway stations (Figure 7).  The modelers were challenged by the peculiarities and limitations of the locations and the track spacing, and applied significant creativity to make the models fit and still appear realistic.  Not only do these highly detailed models have a number of unique and creative features, but they are also perfectly integrated into the activity of the subway trains which these stations are meant to serve.  Flashing lights announce the imminent arrival of the next train, and the trains themselves stop in just the right locations to allow riders to get on and off.  Route maps, benches, lighted advertising signs, trash cans, newspaper vending machines, and a wide variety of characters are included to liven up each of the stations. 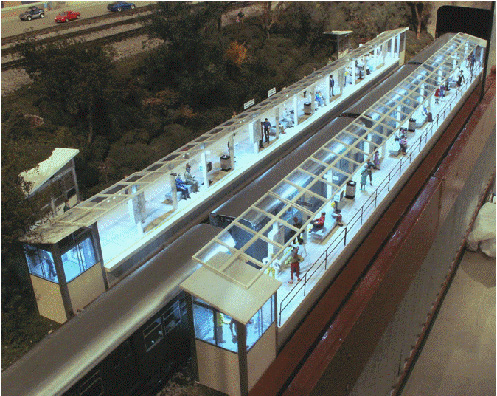 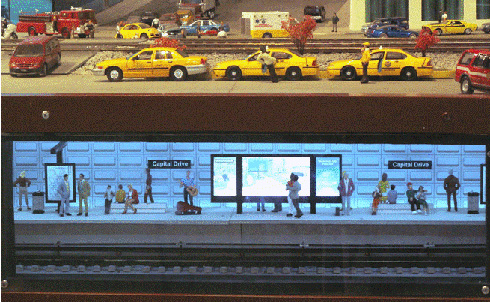 Figure 7b.  The Main Subway Station and Its Parking Lot Above

Selection number eight is the largest, most imposing, most interesting, and most highly detailed building in the Modern City.  It’s the “building under construction” (Figure 8).  It’s another wonder to behold, with an amazing number of details and unique scenes on many of the floors of the structure, which is allows one to see the interior because it doesn’t have its exterior walls yet. 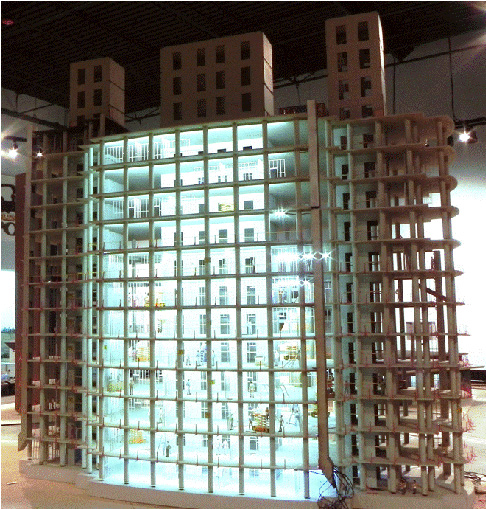 Figure 8.  The Building Under Construction

Model number nine, the Modern City Sky tower (Figure 9) was selected not because it incorporated a lot of detail, but because it provided an outstandingly creative and beautiful solution to one of the EJ layout’s vexing design challenges: hiding one of the large I-beam support columns which extended upward out of the city’s ground level to support the EJ building’s roof.  The column is covered by the tower structure, and the lighted visitors’ platform makes the column above it nearly invisible. 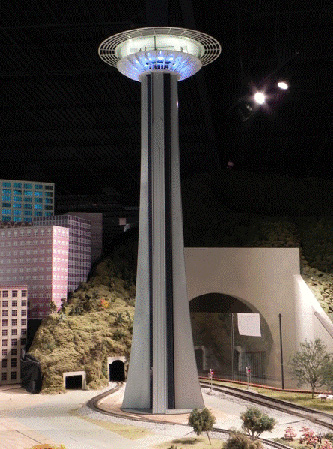 The tenth selection is the Modern Yard’s control tower.  The configuration was inspired by the octagonal shape of Cincinnati’s Queensgate Tower.  It differs in that this tower needed a base which would fit in the narrow space between of the yard’s tracks.  The model’s chief innovation and primary reason for selection is the incorporation of large simulated television monitors on the central walls of the tower’s elevated control center.  The addition of details like television cameras, and a variety of antennas provided additional realism. 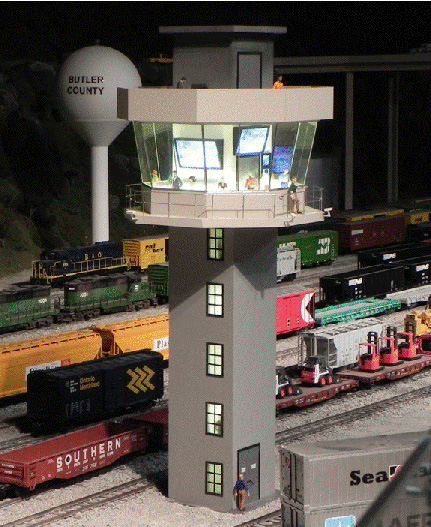 It was quite a challenge to select just ten scenic elements for this 2011 top-ten retrospective.  The list of items that came up as “honorable-mention” is long indeed.  The spectacular quality of the modeling, that make the EJ layout the work of art that it is, is a tribute to the talent, hard work, and creativity of the paid and unpaid modelers who have contributed so much already and are continuing to contribute to making the layout ever better.

The challenge to the visitor is to slow down and take the time to look carefully and fully at the models and details included.  Many have stories to tell or are reminders of the history that led us to today’s lifestyle.  To explore it well takes several visits, and the satisfaction you can get from that exploration will be well worth it.