In this installment we’ll look at some temporary additions to the EnterTRAINment Junction (EJ) Layout consistent with the Halloween theme most ably represented by the Jack O’Lantern Junction Halloween Event.  All of the scenes shown below are in the area around the Modern City.  As usual, the descriptions mostly follow the order in which you would see the described items as you follow the aisle in sequence from entrance to exit.

Just beyond the parking lot for the main underground subway terminal and adjacent to it, a Halloween party is underway with lots of costumed characters and, of course, some large large-scale pumpkins (Figure 1). 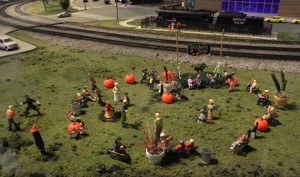 The residential area just beyond the party field has been spruced-up for the season, and all of the houses sport some elaborate decorations (Figure 2). 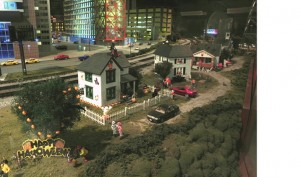 A representative example is shown in Figure 3 with its enormous scale jack-o-lantern. 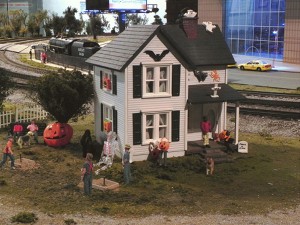 Since cemeteries are always favorite spooky haunts, the one next to the church is no exception with its ghoulish goings-on (Figure 4). 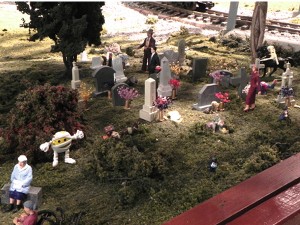 The most noteworthy is a scene intended for the soccer field across from the in-layout restrooms.  It was still in work in the volunteer workshop when the following photos were taken.  It’s a superb replica of a very popular Cincinnati Halloween haunt, the Dent Schoolhouse (Figure 5), shown here still on the workbench.  Spooky lighting, moving ghosts, and a line-up of customers waiting to get are all there to add fun to the scene.  Like the lighted sign out front says, check it out at www.frightsite.com for more information. 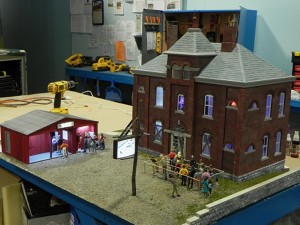 And, among the waiting Dent customers are some characters in costume (or are those really costumes?).  You never know what frightful offerings are part of the meant-to-scare-you entertainment at the Dent. 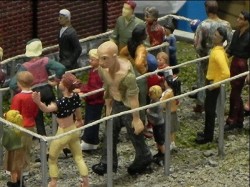 Check these scenes out the next time you come to see the layout, but don’t wait until after Halloween, when they’ll probably be gone again until next year.