This installment will look at some of the new things added to the layout recently.  As usual, the descriptions mostly follow the order in which you would see the described items as you follow the aisle in sequence from entrance to exit.

The first addition shown is the new lumber yard in the Middle Period city.  It’s right across the aisle from the large locomotive wheel museum exhibit.  The photo was taken from the steps up to the mezzanine, to eliminate the problem of reflections in the barrier Plexiglas.  It also provides a good overall view of the facility (Figure 1). 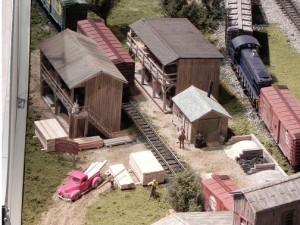 From the mezzanine, looking at the Middle Period city just to the left of the aisle-way tunnel from the Early Period, one can see a newly installed apartment building (just behind the bank mentioned in the previous article).  This building recycled some of the facades formerly used for the Modern City’s buildings.  With a few cut-out windows, some curtains, some three-dimensional detail at the corners and cornices, and a rooftop garden, this building has taken on a whole new and quite impressive look (Figure 2). 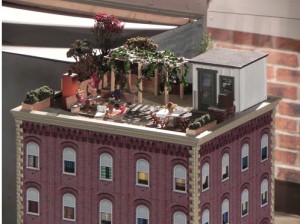 A view from the upstairs meeting room (above the restrooms), shows the Modern City as it was on 7 Mar 2011, showing the Oakmore Skytower front and center (Figure 3).  The Capitol Building at the lower right, which had been a prominent fixture in the previous version of the City was temporarily installed where you see it.  It has since been moved to a temporary location awaiting reinstallation in what, hopefully, will be its appropriate final location.  This view is slightly out of the “walking-the-aisle” order, because it existed at an earlier time that what follows.  It’s an illustration of the continuing changes which are being made to the layout. 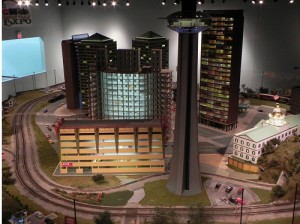 Figure 3 Modern City at a moment in time

A new addition to the Modern City’s main boulevard is an elevated boardwalk only for pedestrians and cyclists, which connects the main level of the city with the slightly higher level on which the Capitol Building in Figure 3 once stood.  That building has been replaced by a new “old style” building which can be seen at the far end of the boardwalk (Figure 4). 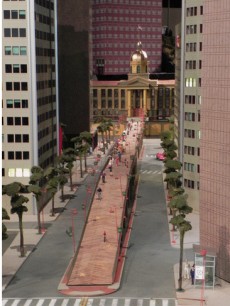 The new building has the look of a venerable old school or college, built in a deliberate retro style that is a significant contrast to the modern buildings that surround it (Figure 5). 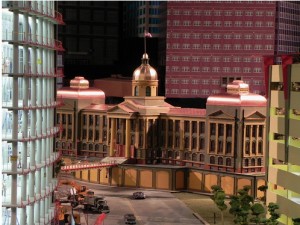 The final new item in this tour is the newly added control tower for the Modern Yard (Figure 6).  The design concept was very loosely based on the Queensgate Tower in Cincinnati, though considerable modifications were needed to make it fit in the space available.  The most notable details are the multiple display monitors, the TV cameras, and the communications tower on top with its many antennas and blinking red light. 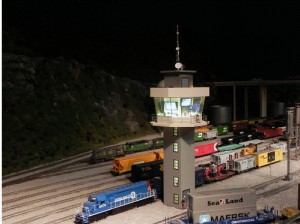