While we’ve been focusing our attention on the upgrade to the Modern City, some less grandiose but equally worthwhile improvements have been incorporated into the Middle Period City. Also there’s been a long-awaited completion in the Modern City. As usual, the descriptions follow the order in which you would see items described as you follow the aisle in sequence from entrance to exit.

The first change requires a bit of a search. As you exit the tunnel from the Early Period to the Middle Period, the first building on the left is a gray bank building (Figure 1). It’s new. At first it doesn’t appear that imposing, but there is something interesting going on. Is that “lady” by the door carrying a submachine gun? Are the people in the bank raising their hands? You bet! There’s a robbery in progress. It’s complete with fedora-hatted gangsters, waiting get-away cars, and, of course, the gun moll.

A bit farther along the frontage road on the left of the aisle, just past the fire station is a newly added open-air market (Figure 2). It’s well lit, and there are a lot of customers checking out the gorgeous produce as more is being brought in by suppliers. 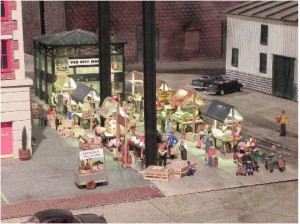 On the other side of the city, past Union Station, adjacent to the road that runs from the aisle across the tracks and up to the upper level of the city are two very recognizable (if you’re old enough) places for getting food and drink. Big Al’s Shake Shop, shaped like a giant milk shake cup complete with straw, provides both stand-up and sit down service (Figure 3). Not shown here, but gracing the current scene is a roller-skating waitress. Look for her next time you come. 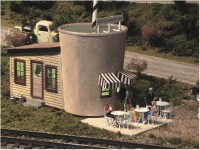 On the other side of the street is the Diner, made from an old passenger coach (Figure 4). It has both counter service and booths for customers, and there are some taking advantage of each. 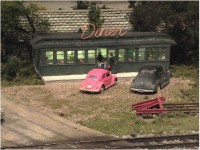 Past the mezzanine, the engine servicing facility has been begging for a station for passengers as well as freight to support the facility, the railroad office building and the nearby town. That has now been installed, and already there are passengers waiting (Figure 5). 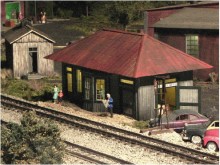 In the Modern City, work has progressed on the subway system. The third station, the second underground, has been created and installed across from the rest rooms. It has a window, just like the other underground station, which allows you to see the details: the escalators, the machines for purchasing tickets, the turnstiles for checking tickets, the usual system maps, and of course the passengers (Figure 6).

So, the next time you come, check out the big things that have changed, but also look for the smaller details. You’ll be surprised and amazed at what you’ll find.