Our tour this month will look at some of the more noticeable changes that have been made at EnterTRAINment Junction recently.  As usual the sequence will be in the order in which you’ll see them as you walk the aisle through the layout.

The first item is on the lakeshore behind the town of River Bend, in the Early Period.  It is a new dock making the landing for the steamboat much more civilized (Figure 1).  The steamboat is, after all, the landing’s primary customer.

As you exit the tunnel from the Early Period to the Middle Period, you’ll see a new whistle-stop station adjacent to the mainline tracks on the lower level of the Middle City (Figure 2).  The station is well lit, but passengers do have to contend with the stairs to get to and from it.

On the other side of the city, near the drive-in theater, there is a new business: a feed mill (Figure 3).  The truck, filled with bags of feed at the loading dock is ready to depart with its cargo.

In the area of the Middle Period Engine Servicing Facility, behind the YMCA, the residents have planted a new garden (Figure 4).  Though not very big, it has a great variety of plants: sunflowers, corn, tomatoes supported by their cages, carrots, cabbages, and lettuce. 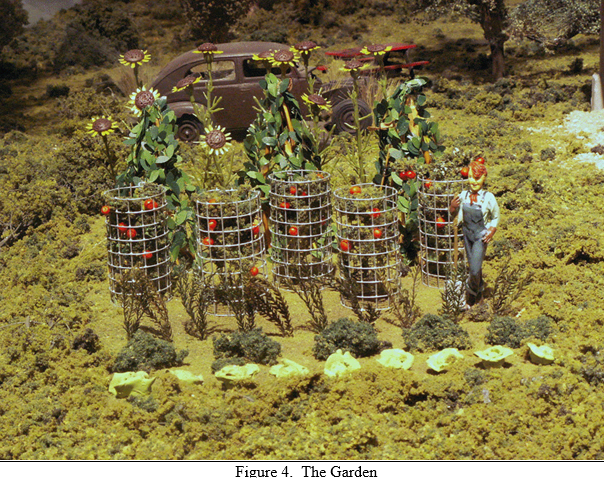 In the Modern City there is only one open-air subway station.  It’s been in work for more than four months now.  We’ve finally gotten one of the two platforms installed (Figure 5).  The challenge has been to make it, with its lighting, easy to install and easy to maintain and also to make believable.  The location is challenging.  It’s at the bottom of a slope on the opposite side of the mainline tracks from the main part of the city.  Because of that, we needed to find a reasonable way for passengers to get to the station.  Rather than a bridge over the mainline tracks and a stairway down the slope, we opted for tunnels under the mainline tracks from the nearby city buildings, the post office and the hospital.  Needless to say, the tunnel is not particularly visible, and all that really needs to show are the entrances to the tunnels at the platform.  One of those entrances, with the two double doors, is shown in Figure 6.

Since the two subway tracks are close together, there isn’t room for a platform between the tracks.  Instead, we’ll install a second platform on the other side of the pair of subway tracks right next to the aisle.  For that, we had to find a believable way for passengers to get to that second platform.  The solution was to put a pair of elevators at each end of both platforms with a connecting tunnel (obviously not visible, or visibly not obvious?) under the subway tracks.  The upper ends of one of each pair of elevator shafts can be seen at the ends of the platform in both Figures 5 and 6.

Other attractions have been added at EJ outside the main layout.  A spectacular layout (Figure 7, shown in three adjoining sections) is being readied in the display area, visible from the opening in the end wall of the layout adjacent to the Modern City.  This relocate-able O-gauge layout was used by the entertainer Neil Young for his own enjoyment and that of his fans, when he toured with his show.  This display is still in work, but even in its unfinished condition, with its huge painted canvas backdrop, it’s quite impressive.

Finally, the Thomas the Tank Engine ride is up and running outside the building for the enjoyment of EJ visitors, children and adults alike (Figure 8).

Most of the changes to the layout, and the other EJ attractions, take a lot of work and time to produce before they become part of what EJ customers can see and enjoy.  Our intent as volunteers is to make them all the best we can.  So, please, be patient with us; and come back periodically to see the improvements that continue to be made as time goes on.