Since words don’t do much justice to what has already been constructed at the EnterTRAINment Junction (EJ) facility, I took some pictures on 26 Sep 07 to show how far along the project has come.  Most of the figures are panoramas made up of several photographs each which were digitally combined (using free demonstration software called “Autostitch,” available on line at https://www.cs.ubc.ca/~mbrown/autostitch/autostitch.html from a team at the University of British Columbia).

Figure1 is a panorama view from the main entrance.  The brick “building” to the right is the hobby shop.  The brightly lit area on the left is the food concession, with the meeting rooms just behind it on the left.  In the center is the station building, with the right doorway being the entry to the layout and the doorway just left of center being the exit from the layout, which goes through the gift shop also located in the station building.

Figure 2 is a view from the Mezzanine, with the Modern Yard just barely visible at the far wall to the right.  The waterfall that flows down from the Mezzanine would be just off the right edge of the picture with it dropping into a pool that will be located on the near table at the right of the picture.  The Early Period area is shown in the distance, right of center.  The walkway tunnel transitioning from the Early Period to the Middle Era is just left of center, and the Middle Era city is on the near tables on the left, extending farther to the left out of view.

Figure 2  View from the Mezzanine

Figure 3 is the widest of the panoramas.  It was taken from the “balcony” of the observation tower that’s located above the rest rooms adjacent to the Modern Era portion of the layout.  The observation tower is a bonus, for use by volunteers and their guests only; the public is not allowed there.  Shown are the Modern Era city on the left with its angled streets.  The Hot Air Balloon Area is on the near tables just right of center, and the Middle Era Engine Servicing Facility is just beyond the dark support column near the center of the picture.  The Amusement Area is on the table on the far right, and the Modern Yard on the table in the distance on the right.  The walkway that meanders through the Modern Era portion of the layout is shown in the foreground.

Figure 3  View from the Observation Tower

A closer view of the “loading room” area is shown in Figure 4, showing some additional detail.  The raised platform of the Balloon Area is in the foreground.  Behind it is the loading room central support wall with an elevated catwalk that will be used to access the loading tracks for the high-level main lines that snake along and through the mountain ridges in this part of the layout.  Beyond and to the left on the table is the Middle Era Engine Servicing Facility with the near square hole for access from below and the far square hole for the turntable, which, together with the roundhouse, will be the key feature of this part of the layout.  Beyond and in the center, covered in drywall, is the Mezzanine, with stairs at the left, work and control room underneath, and the viewing-area on top, its railing showing just above the top of the drywall. 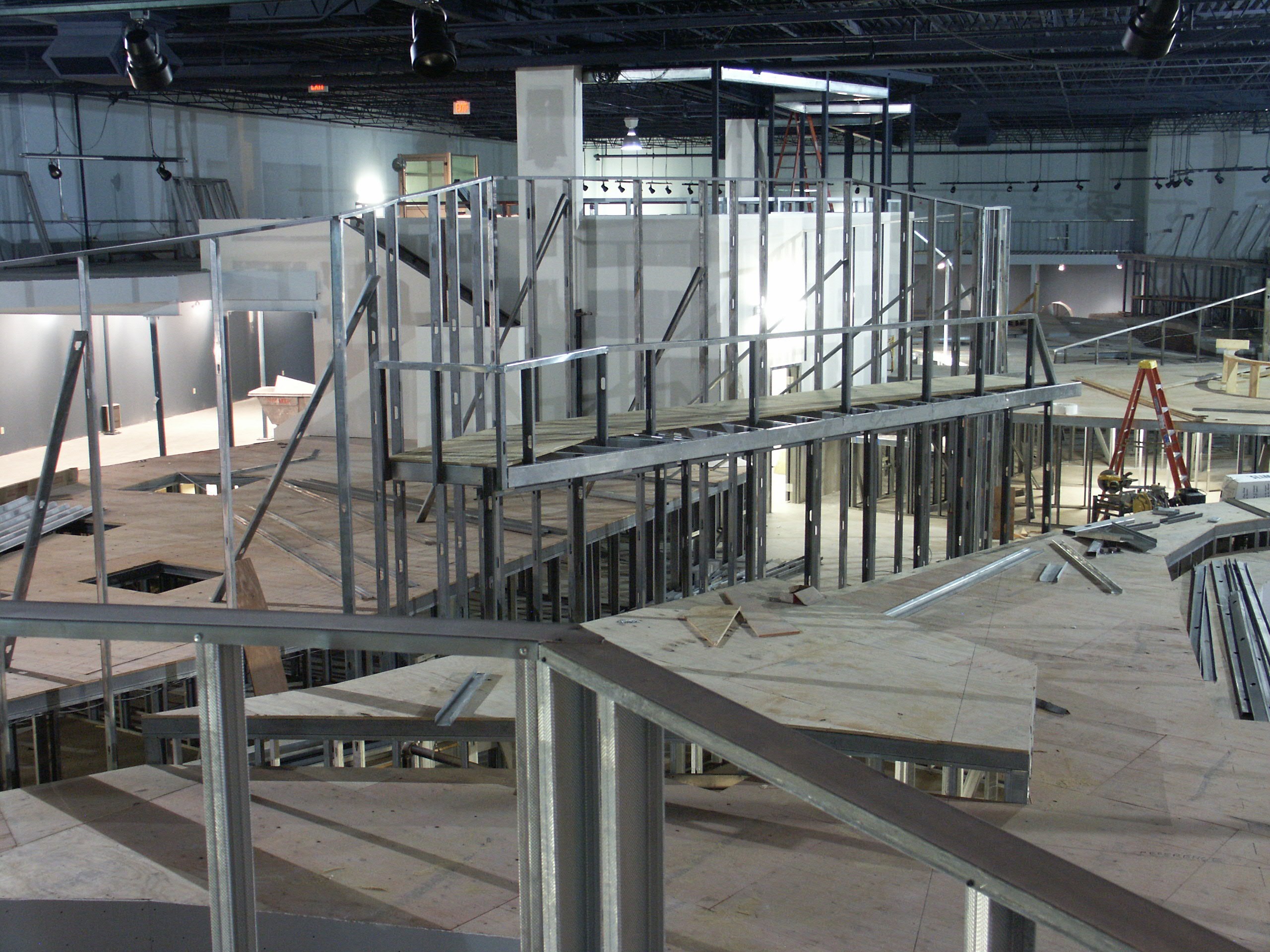 Figure 5 is a closer view of the Middle Era Engine Servicing Facility table.  The square hole near the right edge of the table is where the turntable will be installed.  Along the right wall is an extension of the elevated Mezzanine.  An airport is planned for the top of this area, and railroad museum exhibits with be on display below it.  In the distance on the left can be seen the street layout of the Modern City.  On the far wall in the distance beyond the city is the doorway to the volunteer workshop, which contains the tools and supplies for volunteer layout construction work.  A panoramic view of the workshop from that doorway is shown in Figure 6.  This is a spacious and well-lit area, which provides both a place to work as well as a place to store materials and constructed items until they are ready for installation on the layout. 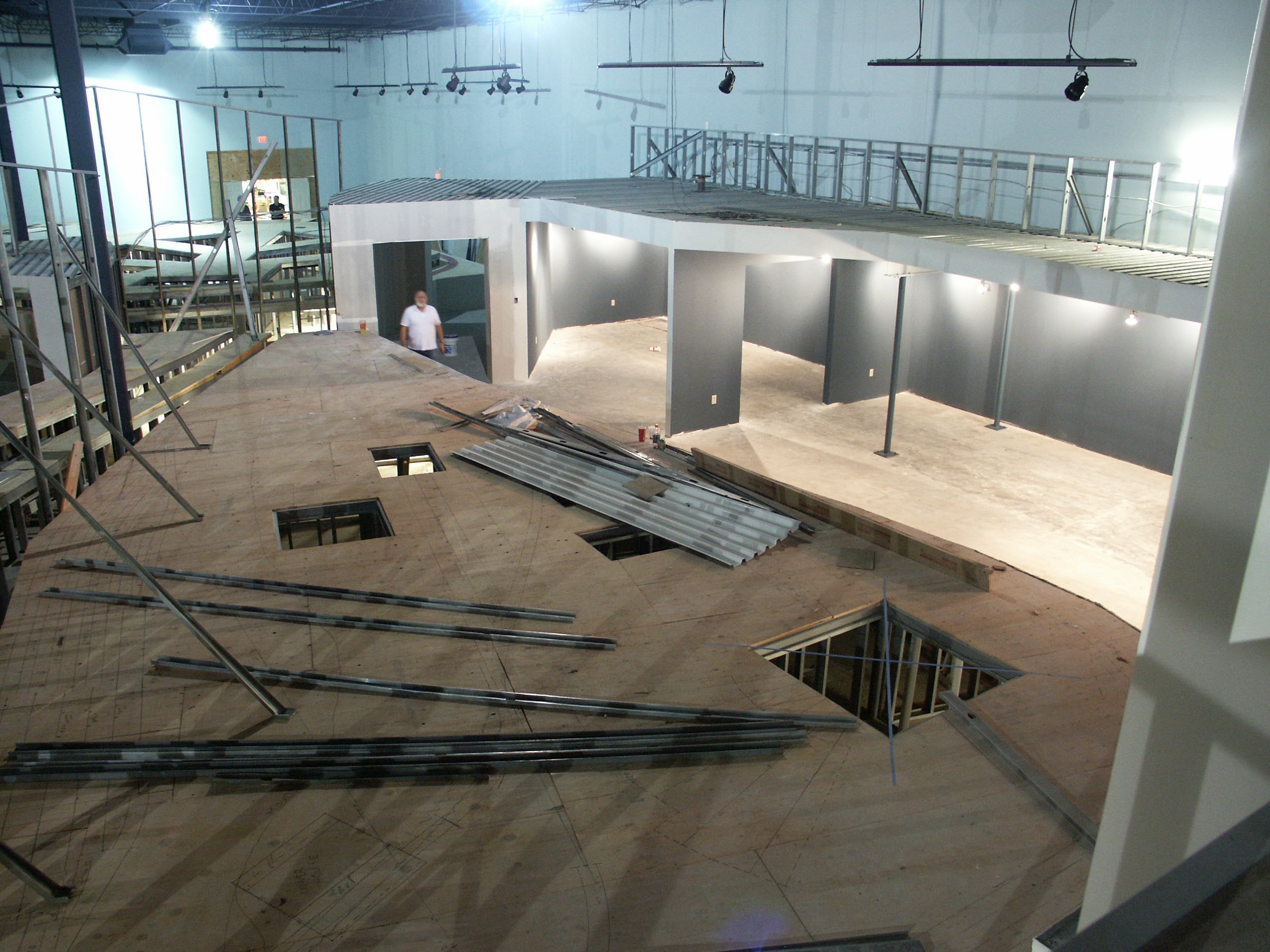 The contractor construction work is almost finished, with completion expected by the end of October.  Then it will be up to the volunteers to do their part.  Calls for section gang and work session meetings will increase, and your opportunities to participate in a more pleasant environment at the facility will also increase as bathrooms, air conditioning, and better lighting are brought on line.  Join us.  It’ll be GREAT!