This month’s article covers the most recent project completed by the Miami Valley Garden Railroad Society’s EnterTRAINment Junction (EJ) volunteers: the upgrade of the Rexall Drugstore in the Middle Period city.  The drugstore is located at the left corner of the same building which houses the Elwood Grill in the right corner.  You can find it across the aisle from the big locomotive wheel display.  Figure 1 show how it looked when we started the project.

To begin, we needed to do a bit of internet research to find out what drugstores looked like in the mid 1940’s.  Big city drugstores had large window displays with a lot of attention paid to two major money-making products – liquor and tobacco.  So, what we needed were shelves for the window displays, representative examples of the products on sale to put on those shelves, and a few advertising signs to add more color.  So, we made liquor bottles using the nested shrink-tubing technique described in Article 100, and added scaled-down labels (Figure 2 top).  Cigar boxes were made by gluing properly-scaled pictures of the tops and sides of the boxes onto 1/8-inch-thick pieces of  plastic the scale size of cigar boxes (Figure 2 bottom).  The dime in the pictures gives a sense of the size of these details.

To add interest, we decided to add the figure of a drugstore employee placing a box of cigars onto one of the window-display shelves.  We needed a figure which we could easily modify for that purpose.  One of the “Just Plain Folks” figures looked like it would fit the bill.  Its arms were spread away from the body, so they could be cut, rotated, and re-attached to the desired positions; but that hat had to go.  Judicious use of belt sander and files did the trick; and with a new paint job, we had him looking like a middle-aged store manager, complete with the “name tag” on his lab coat.  The initial plan was to shape the remains of the hat into a head of hair or make some hair with putty, but the bald head looked much more distinguished and, of course, it was much easier to do.  What you see in Figure 3 is the result of the transformation. 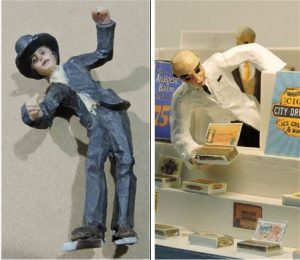 Because the window displays blocked much of the view of the drugstore interior, we decided to use pictures of drugstore interiors as the background, rather than building actual interior details.  The only details added were the checkout counter, cash register, cashier, advertising signs, and some customers (Figure 4). 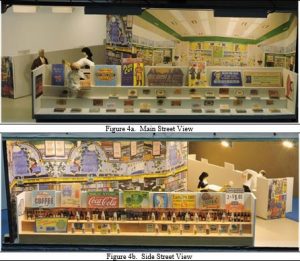 Figure 5 is an overview of the interior of the drugstore.  Its location in an acute-angled corner of the building made use of the background pictures much simpler than trying to figure out how to arrange aisles of shelves and display tables in the interior.  As it is, the view of the drugstore from the EJ aisle is fairly limited, and it’s unlikely that EJ visitors will be able to decipher what the interior is actually like.  Because of low-hanging shades in the front windows and the high back of the window display, the more modern aspects of the background on the right are unlikely to be noticed.

In keeping with our other building upgrades, a lighted sign was needed to provide the proper degree of realism. Figure 6 shows the parts of the sign.  Because both its sides are visible from the aisle, we built it with both sides lettered and lit.  A photograph of a full-scale sign was used for the name “Rexall,” and stick-on letters were used for the word “Drugs.”  Because of the high contrast between the lighted sign and the rest of the surroundings, photographs including the sign usually show the lettering washed out.  When the camera is set so that the sign is legible, the surroundings are very dark as in the right side of Figure 6, which provides a more representative view of what the lit sign actually looks like. 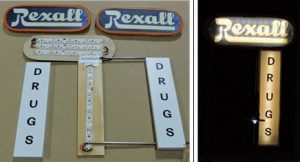 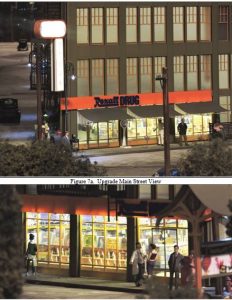 Done!  Figure 7 shows the completed installation.  Check it out the next time you visit.