This month’s article about the work of modeling the interior of the EnterTRAINment Junction (EJ) layout’s Elwood Grill is about people. The diner needs both staff and customers to bring it to life.

Since the cooking area is at the back wall of the dining area, the model needs a visible short-order cook, with a (hopefully clean) white uniform, an apron, and a spatula in hand (Figure 1). 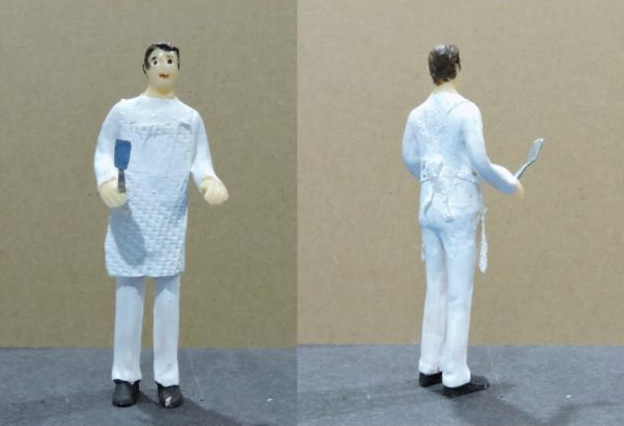 The customer service staff consists of two waitresses and a cashier, shown left to right in Figure 2. The pants showing below the skirt of the waitress at the left were leftovers from her original as-manufactured outfit. They are, of course not appropriate for the time period of the diner (~1946), but grinding them off the plastic figure was unnecessary since her legs would not be visible from anywhere accessible to EJ customers. This particular model was chosen because she had arms that could be modified to the positions desired. Even so, new hands had to be created to enable her to hold the tray and coffee pot. The other waitress (center) has her yellow order pad at the ready to write down customers’ orders. The cashier required only a new paint job for her uniform, since her hands will not be visible to EJ customers. 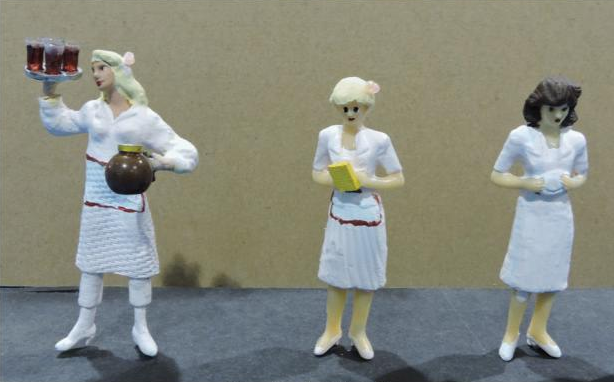 Not too many standing male customers were needed, but a few would add some interest (Figure 3). The man with the hat looked just right as a customer paying his bill at the cashier. 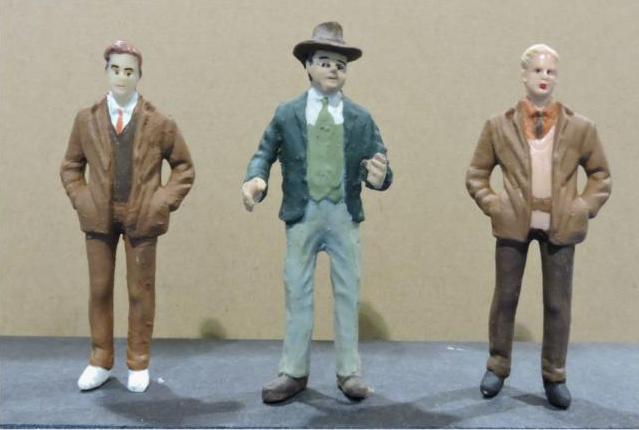 A number of sitting female customers were needed. Figure 4 shows a representative sample. Even though pants for ladies were not appropriate for the time period and location, they will not be visible when these ladies are positioned in the diner’s booths, and so only their upper halves needed to be correct. The lady on the right had a skirt applied, so it would be appropriate for her to sit somewhere where the skirt would be visible to EJ customers. 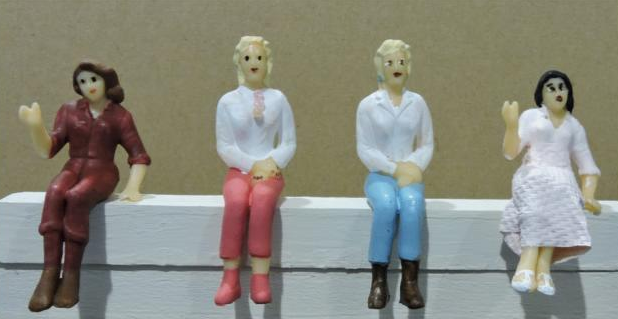 A variety of character types are represented by the men in Figure 5. Even though the two at the ends of the Figure 5 are the same model, their different facial features and clothing set them apart. The briefcases will not be visible when they’re sitting in the diner’s booths. 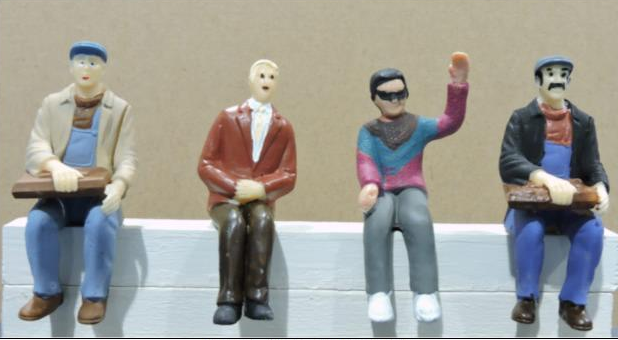 The EJ lady volunteers who work on the modeled people for the EJ layout have done an outstanding job modifying and painting the various figures used throughout the layout. They have always beautifully met the challenges they have been given to produce special characters needed for particular scenes, like the cook and waitress shown above. However, there’s no value in having them put a lot of effort into features that will not be seen. Some examples were shown above, but a much more telling example is shown in Figure 6, when what was needed were a lot of figures to be seated in a long heavyweight passenger car. There the unseen legs just got in the way when trying to install the figures. And, by removing the legs from standing figures, a greater variety of styles and poses would be available compared to using just pre-molded sitting figures.

As usual, creativity and talent abound among the EJ volunteers.

Next time, we’ll look at the diner’s interior, so stay tuned.